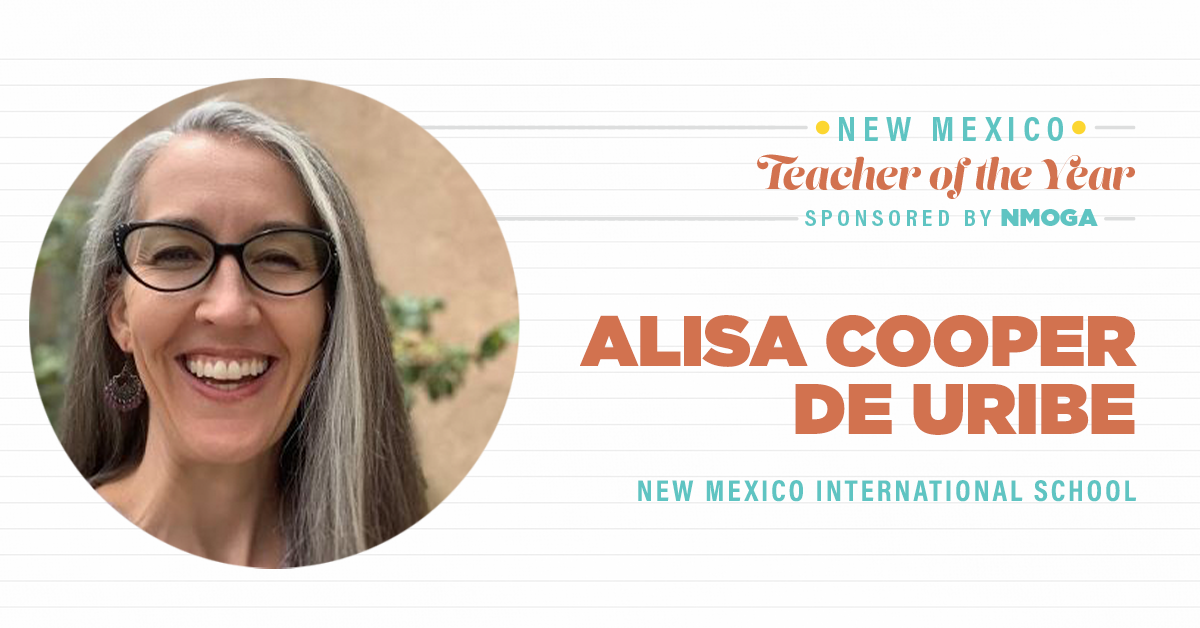 The award was presented during a virtual ceremony that included students and staff from her school.

“Ms. Cooper de Uribe’s reputation as a friend and mentor to her first-grade students was just one of the qualities that make her a perfect fit as New Mexico Teacher of the Year,” Stewart said. “Her mission – to imbue students with multilingual skills that will put them on a path to future success – mirrors my goal of excellence in education for all of New Mexico’s students.”

Ryan Flynn, executive director of the New Mexico Oil and Gas Association, the title sponsor for the New Mexico Teacher of the Year program for the second year, also participated in the virtual ceremony. His organization is contributing up to $25,000 worth of support and professional development opportunities for the winner.

“NMOGA is honored to recognize Alisa Cooper de Uribe as New Mexico’s latest Teacher of the Year. As her colleagues and former students report, she represents the teacher all of us want in our children’s classrooms,” Flynn said. “Teachers across New Mexico are critical to ensuring that our kids have the best and brightest opportunities ahead of them, and the oil and gas industry is proud to invest more than $1 billion annually to help support the vital work of preparing and educating our children.”

Cooper de Uribe grew up in Raton, N.M., where she says she first became interested in cultures of the world and learning to speak Spanish. She holds a bachelor’s degree in English from Abilene Christian University and a master’s degree in Spanish from Middlebury College.

She has been with New Mexico International School for nine years and helped develop its International Baccalaureate Programme of Inquiry for a Spanish immersion school. Before that, Cooper de Uribe taught third grade at The Buckley School in New York.

Her professional association memberships include the International Dyslexia Organization and the New Mexico Organization of Language Educators. She was recently awarded a certificate by the National Hispanic Cultural Center in recognition of a statewide poetry reading competition for students that focused on memorization and performance skills in Spanish.

“I believe teaching should reflect the way we live our lives outside the classroom,” Cooper de Uribe said in her application. “Music, cooking, dance, film, sharing stories with loved ones, and enjoying a good book – many of those things are fundamental. By bringing that pattern into the classroom, engagement in the learning process increases for everyone, including the teacher,” she said.

The New Mexico Teacher of the Year program incorporates the New Mexico Public Education Department’s vision of a world-class educational system in which all New Mexico students are prepared to succeed in a diverse, and increasingly complex, world.