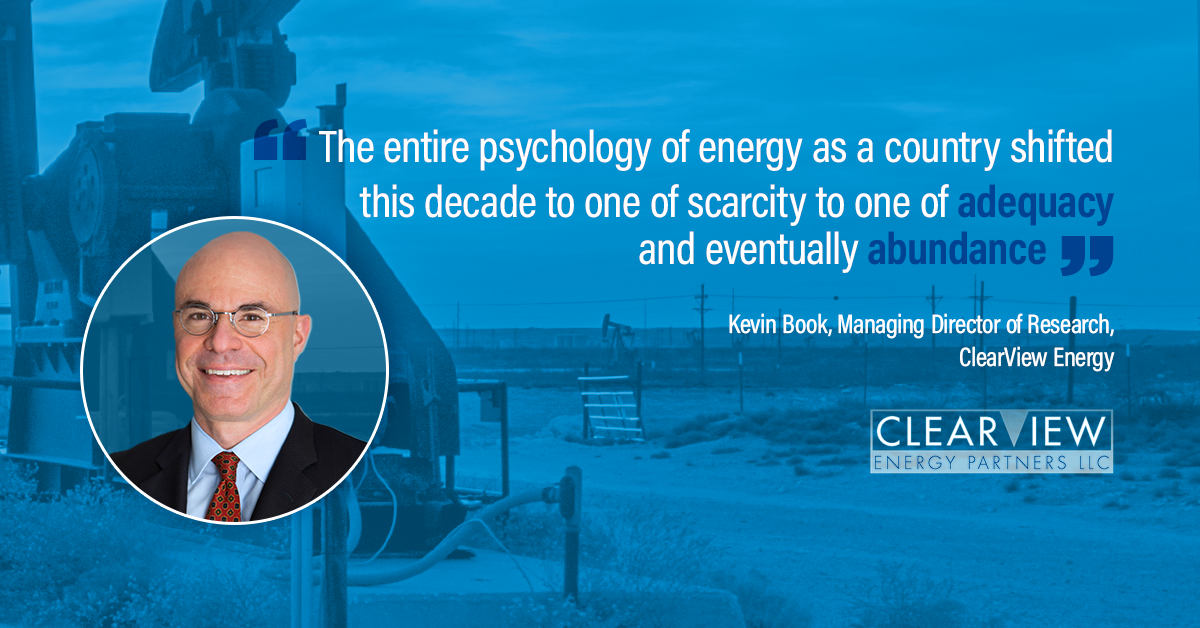 The decade in energy saw the returns from the shale boom of oil and gas pay off.

The shale revolution from horizontal drilling and hydraulic fracking, which started to take off in 2006 but peaked this decade, helped get the United States to the verge of being a net energy exporter for the first time since 1953, moving off its dependence on Middle East oil and closer to “energy independence."

“The entire psychology of energy as a country shifted this decade to one of scarcity to one of adequacy and eventually abundance,” said Kevin Book, managing director for research at ClearView Energy. “What it means is Americans are not afraid of running out of energy like they used to be.”

The rise of gas has allowed the U.S. to wield energy as a geopolitical weapon.

Before the shale boom, the U.S. was expected to become a big importer of liquified natural gas — the chilled, liquid form to which gas must be converted for shipment in giant tanker vessels across the sea.

The U.S. now exports LNG to 36 countries, double the 18 destinations at the beginning of the Trump administration, which has sought to ship more gas to Europe to reduce its dependence on Russia.

“The geopolitical leverage of dominant pipeline suppliers like Russia has been weakened, enhancing our energy security and helping move China to less polluting fuels,” said Jason Bordoff, the founding director of the Center on Global Energy Policy at Columbia University and a former White House energy adviser to President Barack Obama.

The proliferation of natural gas is also the biggest reason U.S. carbon emissions have declined this decade, defying projections from the Energy Information Administration in 2010 that emissions would continue rising, but at a slower pace. Natural gas, a fossil fuel that emits half as much carbon as coal, has mostly replaced coal in the electricity sector, generating 35% of U.S. power in 2018, the most of any source.

“The decline of coal outperformed all projections,” Book said.

As the decade ends, however, Democratic policymakers, state and local governments, and climate change activists are looking to a future beyond the shale boom, as they realize its limitations and potential consequences.

Although gas became king, this decade also saw the rise in renewable energy, with alternatives to fossil fuels breaking out through falling costs and supportive policies, especially wind, solar, and energy storage technologies that carry excess power for use when the sun sets and the wind is still.

“The wide-scale rollout of genuine alternatives to fossil fuels did not happen until this decade,” Book said. “It's underappreciated that so many alternatives are happening at the same time.”

That progress has empowered more than a dozen U.S. states, districts, and territories, along with about 200 cities and counties, to set targets for achieving 100% carbon-free electricity.

The federal government still lacks a comprehensive federal policy to curb carbon emissions, after Democrats’ effort to pass cap-and-trade through Congress failed in 2009.

However, a rise in youth-led activism at the close of this decade in response to a 2018 report by the United Nations Climate Change panel has inspired states and localities to act.

That activism has also prodded Democrats running for president in 2020 to pledge to reach net-zero carbon emissions by 2050, a goal that would require mostly getting off fossil fuels.

“There is still a role for gas to replace some of the remaining coal and balance renewables,” Bordoff said, alluding to the intermittent nature of wind and solar. “But over time, we need to increasingly think about the role of gas in a deeply decarbonized economy.”

Even discounting external factors, the U.S. shale boom is beginning to struggle under its weight.

U.S. shale oil production will essentially flatten out in 2021 after slowing to 440,000 barrels per day in 2020, the consultancy IHS Markit projected in November, blaming trade tensions and weaker demand.

Oil and gas companies are also grappling with managing leaks of methane, a potent greenhouse gas that is the main component of natural gas, in the course of their operations.

With gas becoming dominant, and the economy growing, U.S. emissions rose in 2018 after years of declines. (EIA projects emissions to fall again slightly in coming years.)

“There is still an opportunity for some period of time for the U.S. to sell oil and gas if it cleaned up methane leakage,” said Amy Myers Jaffe, director of the program on Energy Security and Climate Change at the Council on Foreign Relations. “Doing something about climate is a process under which we are still going to be able to export what we don't use in the U.S.”