The Energy 202: The U.S. just hit a major milestone as a petroleum exporter 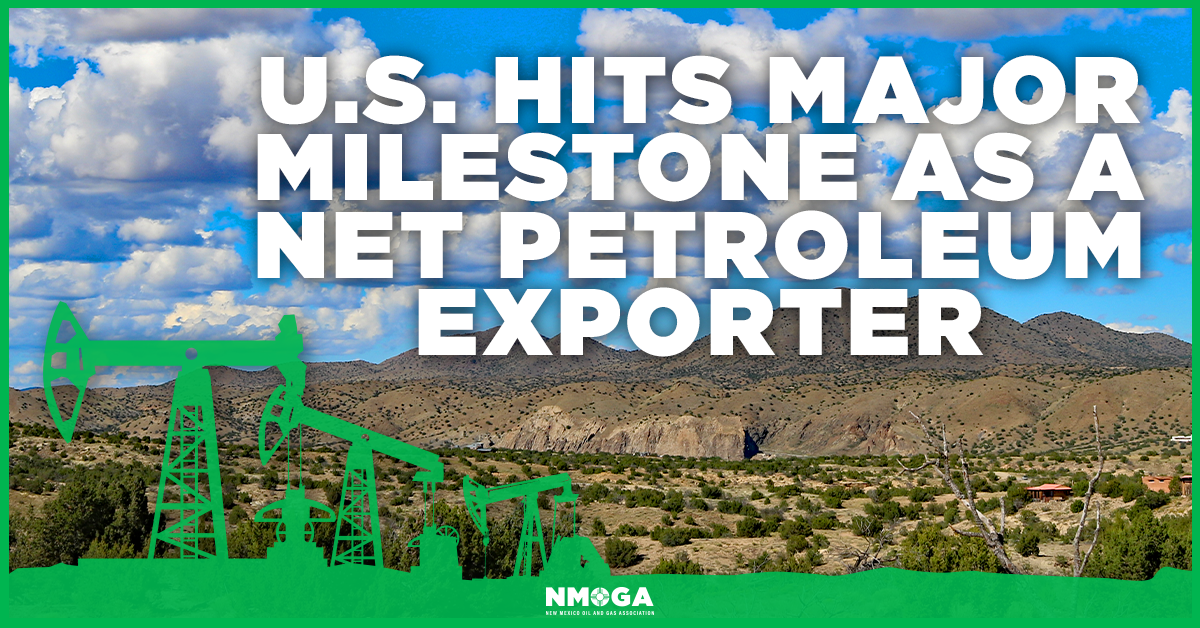 After years of relying on other countries for petroleum, the United States just reached a new energy-producing milestone by notching its first month in at least 70 years exporting more crude oil and petroleum products than it imported per day.

During the month of September, the country sent out 89,000 barrels a day more than it brought in, according to new official data from the U.S. Energy Information Administration released over the long Thanksgiving weekend.

That marks the first full month the United States as been a net petroleum exporter since recordkeeping began in 1949. The country, which for years has been on the path to becoming a net oil exporter, first posted net petroleum exports on a weekly basis in December 2018.

The monthly milestone, fueled by an outpouring of fracked oil, was unthinkable just more than a decade ago when president after president from Jimmy Carter to Barack Obama spent their State of the Union addresses hammering home the need to wean the United States off of dependence on foreign oil.

“This is a very big deal, not just rich in symbolism but marking a major and tangible benefit to the U.S. economy,” said Daniel Yergin, vice chairman of IHS Markit and author of “The Prize,” a Pulitzer Prize-winning history of the oil industry.

“It’s the end of an era that began with the oil crises of the 1970s,” he added, referring to the days of long lines at gas stations when Middle Eastern nations would wield their vast supplies of oil as a political weapon on the world stage.

President Trump, too, has touted making America a net energy producer as a signature campaign issue. In office, he has followed through by aggressively expanding drilling on federally controlled lands and trimming back safety rules on offshore oil operations in moves cheered by the petroleum industry and condemned by environmentalists.

“We have unleashed a revolution in American energy,” Trump said during his most recent State of the Union speech while touting the oil export numbers.

But the decade-long surge in domestic oil production began before Trump took office with a spigot of new oil produced via the hydraulic fracturing, or fracking, of shale deposits in the Permian Basin stretching from Texas to New Mexico and the Bakken formation running from North Dakota to Montana.

“Shale completely turned it around,” Yergin said. “The world has never seen growth at this scale this fast. It’s almost as though, in number of barrels, that the United States added a second Saudi Arabia within its own borders.”

The height of U.S. oil imports came in August 2006, when the United States posted net imports of more than 13 million barrels a day, according to EIA.

Since then, new fracking techniques, coupled with the lifting of a ban on oil exports in 2015 through a compromise between Obama and congressional Republicans, helped vault the United States to its oil-exporting status.

“The rapid rise in U.S. oil production began before President Trump and would very likely have continued even if he had not become president, notwithstanding his aggressive deregulatory efforts,” said Jason Bordoff, founding director of Columbia University’s Center on Global Energy Policy.

Through its petroleum exports, the United States has been able to take a bite out of its trade deficit with the rest of the world — another Trump campaign promise — even though the overall U.S. deficit ballooned to $621 billion last year under Trump.

To be clear, the United States is still far from free of the sway of global energy markets.

Gulf refineries still rely on the import of foreign heavy crude since they are best suited for converting that type of oil into gasoline, jet fuel and petroleum products.

And one of the average American’s main concerns when it comes to energy policy — the price at the pump — is still set by supply-and-demand forces abroad.

In fact, a spike in the historically volatile price of crude oil may undermine the economics of producing oil from U.S. shale formations in the first place.

"Shale oil is more sensitive to crude prices than conventional oil production," said Robert McNally, head of the Rapidan Group, an energy consulting firm, who worked in the George W. Bush White House. "While the economic and security benefits are large and real, being a net exporter does not confer the ability to stabilize oil prices."

Still, the country’s newfound status as a fledgling oil exporter has turned many past choices on energy policy on their heads.

The controversial Keystone XL pipeline system, for example, was initially justified as a way of getting U.S. consumers fuel derived from Canadian crude — the idea being that it’s better to get foreign oil from a friendly neighbor like Canada rather than a more hostile nation. But now, with the United States producing so much of its own oil domestically, an increasing amount of the fuel produced by the Gulf Coast refineries that process the crude brought in through the Keystone system is destined to be sold abroad.

There’s something else poised to potentially turn the import-export equation upside down: the 2020 presidential election.

Two of the top contenders for the Democratic nomination, Sens. Bernie Sanders (I-Vt.) and Elizabeth Warren (D-Mass.), have called for bans on fracking and exporting U.S. fossil fuels. They and their supporters are concerned the flood of U.S. oil on the world market is only accelerating runaway climate change that threatens to upend ecosystems worldwide.

The two other top candidates, according to recent polls — former vice president Joe Biden and South Bend, Ind. Mayor Pete Buttigieg — have instead taken more moderate positions, calling for better regulations on fracking rather than eliminating the practice altogether.