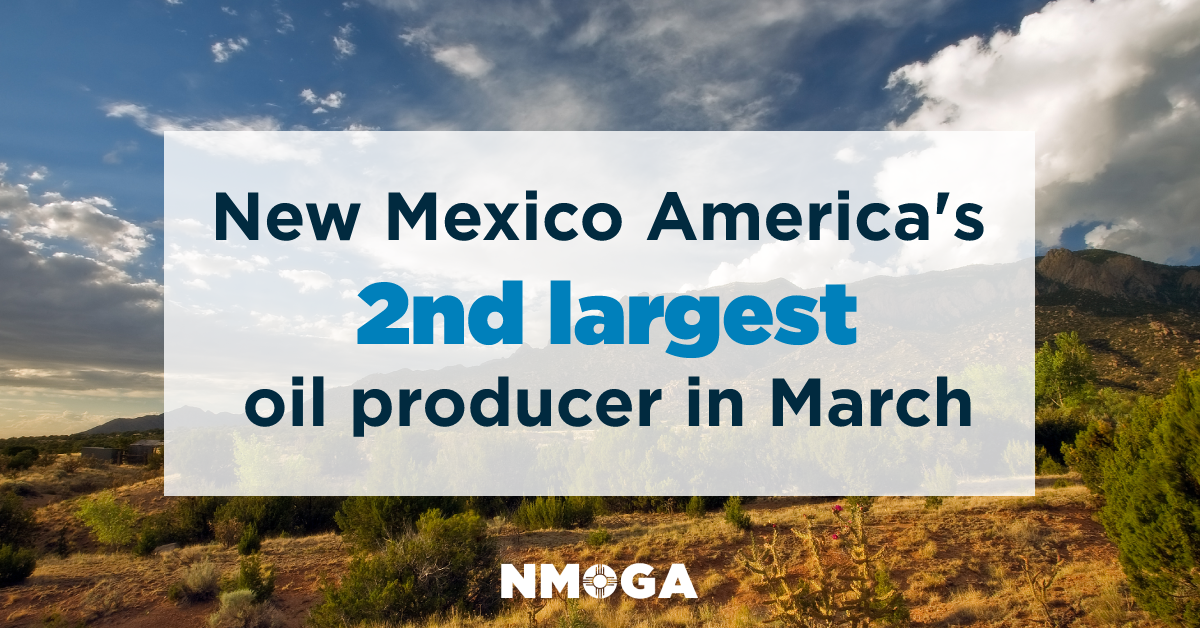 U.S. March production increased by 1,401 kb/d to 11,184 kb/d from Februaryʼs output of 9,783 kb/d and was also 128 kb/d higher than January’s. The increase was due to the rebound from the severe winter storm that hit the four US southern states, Texas, New Mexico, Louisiana and Oklahoma. Note that February’s output of 9,862 kb/d in the previous report was revised down by 79 kb/d to 9,783 kb/d in the current report.

The May STEO report forecasted US March output would be 10,939 kb/d vs. the reported actual output for March of 11,184, an under-estimate of 245 kb/d. Note that March output was 57 kb/d higher than January.

In the onshore lower 48, March production increased by 1,298 kb/d, red graph. The 103 kb/d difference between the two was largely due to the 107 kb/d increase from the GOM.

Of these 10 states, Texas, New Mexico and Oklahoma had the biggest percentage output increases relative to February. On a YoY basis, all states except New Mexico had a lower output than last year. Note also that New Mexico surpassed North Dakota in output and moved into second place.

Rig additions continued in the US from the August low of 172 to 359 in the last week of May. Over the last month there is a hint of slowing in rig additions in Texas and the Permian.

Frac spreads continue to increase at an average rate of close to 15.1/mth.

Texas production increased by 990 kb/d in March to 4,745 kb/d after rebounding from the February winter storm. March output was 84 kb/d higher than January.

According to the EIA, March’s output was 1,027 kb/d day, an increase of 14 kb/d from February. During March, North Dakota had 13 rigs operating and by the second week of May had increased to 16.

Alaskaʼs March output decreased by 4 kb/d to 453 kb/d. The EIA’s weekly production report shows that output in April was close to 450 kb/d, an indication of further declines. Drilling continues in Alaska to try to keep oil output close to 500 kb/d according to this source.

According to this source, U.S. President Joe Biden’s administration defended on Wednesday, May 26 a proposed ConocoPhillips (NYSE:COP) oil development in Alaska, backing the drilling project which was approved under the administration of former President Donald Trump.

The Willow crude oil project holds 590 million barrels of recoverable oil and could produce up to 160,000 barrels per day as soon as 2024, according to ConocoPhillips’ previous estimates.

March’s Oklahoma output increased by 87 kb/d to 404 kb/d after recovering from the winter storm. During March 17 rigs were operating and by the end of May they had increased to 28.

For 2021, Oklahoma’s production is expected to drop by 25% according to this source. It is not clear why this will happen with increasing rigs.

Coloradoʼs March output decreased by 3 kb/d to 368 kb/d. Colorado operated 7 rigs from mid-January to mid-March but increased them to 9 in May.

Wyomingʼs production in March was unchanged at 224 kb/d. Wyoming had 3 oil rigs operating in January and they were increased to 4 in February through to the end of March and then back down to 3 in April and May.

Louisianaʼs output increased by 8 kb/d in March to 98 kb/d and was the same as January’s.

Utah joined 12 other states in a lawsuit against the federal government challenging the Jan. 27 executive order issued by President Joe Biden to ban any new oil and gas leasing on federal land and offshore waters.

Production from the GOM increased in March to 1,870 kb/d, an increase of 107 kb/d from February. If the GOM were a state, its production would rank second behind Texas.

The May STEO projection for the GOM output has been added to this chart and projects output to be 1,874 kb/d in December 2022. This is an increase/revision of 59 kb/d over the previous April report.

Note that the STEO forecast an increase of 58 kb/d in the GOM output in March 2021 to 1,819 kb/d. However the reported actual increase was 107 kb/d. Is the March increase the result of one of four new projects that are expected to begin production in 2021?

The STEO provides projections for the next 13-24 months for US C + C and NGPLs production. The May 2021 report presents EIAʼs updated oil output and price projections to December 2022.

US production will be essentially flat from March to June 2021. It is flat due to decreasing Alaska output offsetting increasing production in the L48. After June, output is forecast to increase at an average rate of 75 kb/d/mth.

The May STEO output projection for the L48 states is essentially the same as the one provided in April except for the revised big output drop in February. The December 2022 output forecast was unaltered at 11.89 Mb/d.

This indicates that onshore L48 production is increasing at a rate faster than expected, based on recent CEO comments.

This chart shows the STEO’s forecast for OPEC crude output to December 2022. OPEC’s crude output is projected to increase from April to October by essentially 3,500 kb/d. After October output remains flat. The October output is virtually the same as OPEC’s output on January 2020, just prior to the onset of the pandemic.

This chart shows the historical supply/demand situation up to February 2021 and after that, the EIA’s forecast out to December 2022. After the supply surplus from February to June of 2020, world oil supply was intentionally reduced by OPEC and its partners. The US also reduced its output but the reduction was more related to the low price of oil.

The May 2021 IEA report states that as of April 2021, world oil inventories have been restored to where they were pre-pandemic. The magnitude of the shortage that was required to return world inventories back to their normal five-year average levels can be seen in the shortages from July 2020 to July 2021.

From July 2021 to December 2022, the average deficit is close to 110 kb/d. To get an idea of how this forecast changes, a record will be kept of the December 2022 shortage to see if it rises or falls.

Above is the total oil production from the 7 DPR basins that the EIA tracks. Note that the DPR production includes both LTO oil and oil from conventional fields

Output is essentially flat from March to June because the Permian’s increase is currently being offset by declines in the Eagle Ford, Bakken and Niobrara basins.

During April, 225 rigs were operating in the Permian, up from 100 in November. These 225 rigs are clearly sufficient to offset the decline from older wells and are increasing production. During May an average of 229 were operating.

Eagle Fordʼs output reached a recent peak in November after shut in wells were brought back online and then began to decline. In June, Eagle Ford’s output is expected to drop by 8 kb/d to 1,030 kb/d.

The DPR forecasts Bakken output in June to be 1,097 kb/d a decrease of 7 kb/d from May.

According to the North Dakota Oil and Gas division, March output in the Bakken was up by 24 kb/d and the number of wells increased by 324. Output per well was 76 b/d down from a high of 108 b/d in November 2019.

The LTO database provides information on LTO production from seven tight oil basins and a few smaller ones. The May report projects the tight oil production to April 2021.

April’s LTO output is expected to decrease by 9 kb/d to 6,923 kb/d. Note that April’s output is still lower than November’s output by 131 kb/d.

The May report made a significant revision to February’s output level. February output was revised down from 6,517 kb/d to 6,028 kb/d, a reduction of 489 kb/d.

After March’s increase in output, the Bakkenʼs April output is expected to decline. April production dropped by 6 kb/d to 1,090 kb/d.

The Eagle Ford basin is expected to produce 945 kb/d in April, a decrease of 19 kb/d from March. April output continues the decline that started in December 2020.

Conventional oil output in the On-shore L-48 is expected to increase by 43 kb/d to 1,785 kb/d in April 2021. This estimate is based on a combination of the April LTO output and the May STEO report that projects US onshore L48 to April.

This chart also projects world production out to December 2022, red graph. It uses the May STEO report along with the International Energy Statistics to make the projection. It projects that world crude production in December 2022 will be close to 82,420 kb/d. This is 2,200 kb/d lower than the November 2018 peak of 84,631 kb/d.

Note that the December 2022 output was revised up from last month’s report by 352 kb/d.