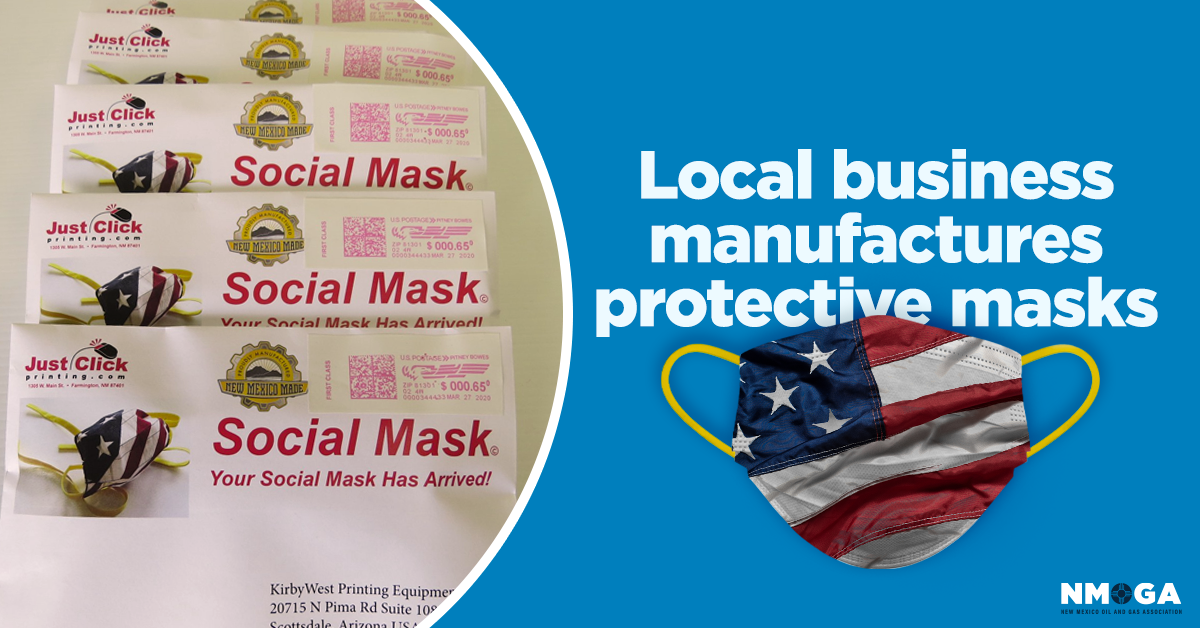 The process of developing and selling a new product — coming up with an idea, designing and producing a prototype, testing it, marketing it, and manufacturing a finished version — is one that typically takes months, if not years.

Jay Willmon and his staff at Just Click Printing, 1305 W. Main St. in Farmington, managed to do it in a matter of a few days.

With much of his firm's business having gone by the wayside during the coronavirus shutdown, Willmon and his employees were talking about what they could do to stay busy last week. The demand for the signs, banners, marketing materials, fliers, personalized clothing and other items Just Click Printing offers had plummeted.

"Since this all started, business has been pretty slow," he said. "People aren't ordering their usual stuff."

Identifying the need for protective masks and realizing they had all the equipment they needed to produce them with their embroidery machines, sewing machines and cutting tools, Willmon and his workers sketched out three to four designs before piecing together a prototype mask on March 25.

Willmon showed the mask to officials at the San Juan Regional Medical Center the next day, and they suggested the product needed pleats and a way to pinch it securely around the nose. Back at his shop, Willmon and his crew added the pleats and affixed a small strip of flexible aluminum to the prototype for a nose bridge. In the space of a little more than two days, they had designed and developed, and were ready to manufacture an entirely new product — one that is in great demand as the virus continues to spread throughout the country.

"Nobody can get 'em right now," he said of the nationwide shortage he hopes to address.

Willmon is excited to have found a way to contribute to the effort to battle the coronavirus.

The masks have two layers, an outside layer made up of regular fabric and an inside layer of embroidery pellon, a lightweight interfacing used to stabilize sewing projects. The nose bridge is made from slices of repurposed aluminum printing plates, and bias tape or elastic bands are used for the straps.

The masks come in three styles — an American flag pattern, a floral pattern or a neutral tan pattern. They are washable and, therefore, reusable.

The masks aren't sold in person, but they are available by mail order. In addition to manufacturing the masks, Just Click Printing shrink wraps, packages, meters and mails the orders, so turnaround time is very short.

Willmon said most orders have come from local customers, including a Farmington appliance store owner who wanted the masks for his workers who go into people's homes to install and work on the appliances the company sells. But others have come from around the region, including Roswell, Durango and Phoenix, even as far away as Wisconsin.

With the product only having been available for a couple of days and word about the masks still getting out, Willmon isn't sure how much of a demand will develop for them. But he's managed to keep his embroiderers busy working on them since last week, and that provides him and his employees with a sense of satisfaction during an otherwise frustrating and concerning time.

"Other than sit around here without much work, we thought we'd come up with something," he said.

For more information about the masks, call 505-326-1344 or visit the SocialMasks Facebook page. To place an order, email orders@justclickprinting.com.