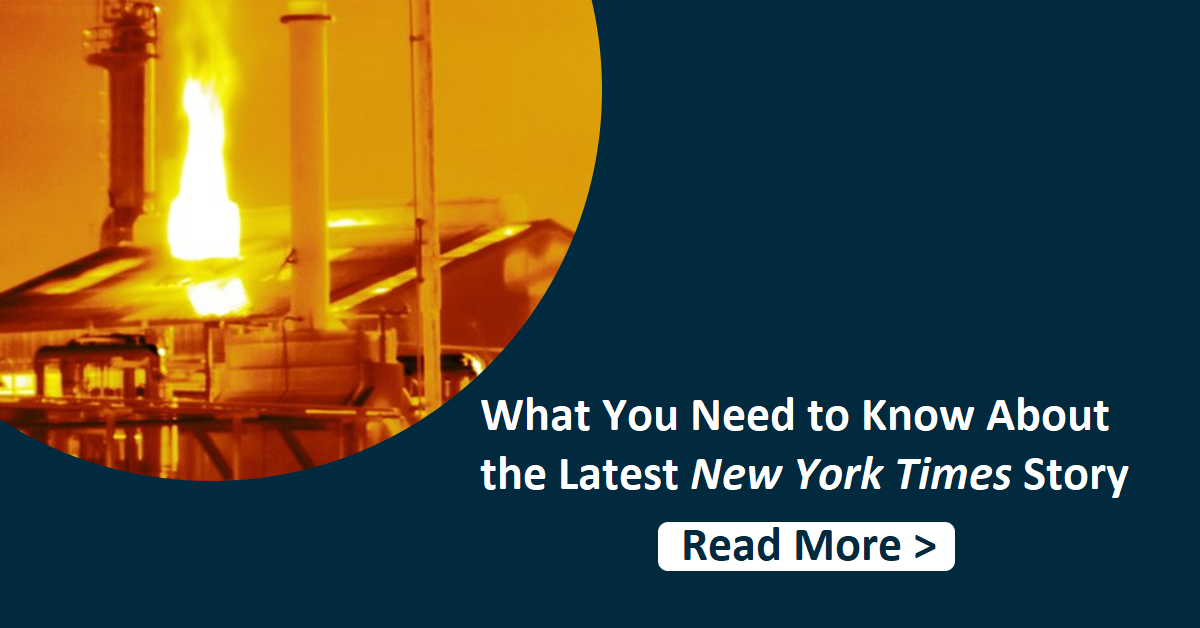 The New York Times claims in its latest article on methane emissions in the Permian Basin to have found a smoking gun on leaks from oil and natural gas facilities.

Times reporters spent a few hours doing flyovers of oil and natural gas facilities in two counties in West Texas, and then followed up the flight by visiting locations they claimed to have shown methane spikes to film with FLIR (Forward Looking Infrared) cameras. Based on these findings, the reporters made the jump that, “Vast amounts of methane are escaping from oil and gas sites nationwide, worsening global warming.”

But there are a few issues with this assumption, starting with the heat signature recorded from the roof of a building. It doesn’t appear to be methane, which calls into question every other stated “fact” in the story.

Given such a lapse in fact-checking by the Times, here are a few things to keep in mind when reading the article.

In a dramatic image, the Times shows what it says appears to be a massive hidden plume of methane shooting directly into the air. But that does not appear to be methane.

In a story the Times spent months producing, the emblematic image could be a massive error. Infrared videos can indeed show methane and other hydrocarbon emissions. But the bright imagery should have been a red flag that what they were probably seeing was heat, not a leaking plume of methane. That didn’t stop them from declaring it methane and – even more embarrassing – using it as the feature image of the story. 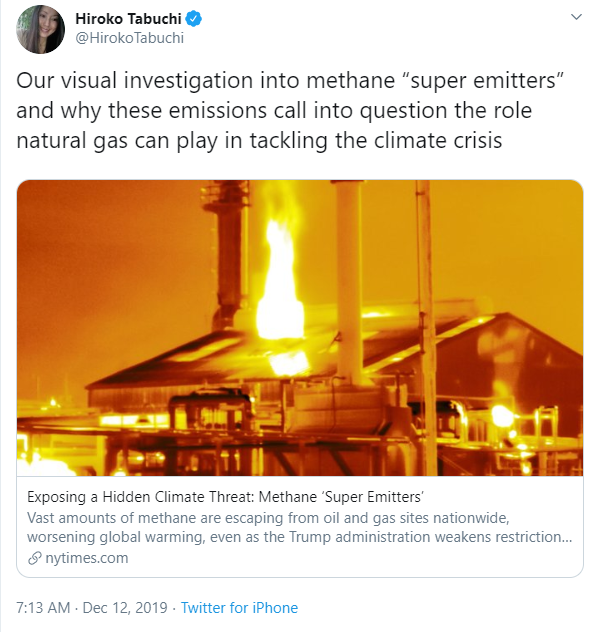 EID reached out to multiple infrared imaging experts and none of them could confirm that this was methane. Instead, the consensus was that what this image was showing was likely heat or steam, not methane.

Fact 2: Research Does Not Support That Fracking Is Causing Global Methane Spikes

The Times makes a pretty blunt statement in the article that “fracking natural-gas production, which accelerated just as atmospheric methane levels jumped, is a prime suspect” in global emissions increases since 2007. Aside from the obvious question of what the heck is “fracking natural-gas production,” (seriously?!), this statement is not supported in existing scientific research.

In fact, the Global Methane Project’s 2019 Global Methane Budget data show the exact opposite to be true. Data from 2013 to 2017 and during the emissions plateau period from 2002 to 2006 show North American methane emissions remained essentially unchanged. More so, as climate scientist Zeke Hausfather explains in a recent Twitter thread, nearly all of the increases attributed to fossil fuels originated outside of North America.

Similarly, a recent UnDark article – written by a Times freelance reporter – looked to global “methane detectives” to determine what might be causing emissions increases. And while they did not have a concrete answer for what the cause is, there was agreement on what it isn’t: oil and natural gas.

Some of this discrepancy between what the Times reported and what appears to be a scientific consensus among experts in the field arises from the fact that previous estimates of methane emissions have been overestimated by as much as 10 times. As Xin Lan, CIRES research scientist and lead author of the peer-reviewed National Oceanic and Atmospheric Administration study that determined that fact, told E&E News:

“We analyzed a decade’s worth of data and while we do find some increase in methane downwind of oil and gas activity, we do not find a statistically significant trend in the U.S. for total methane emissions.”

It could also be that they rely on some seriously flawed and heavily criticized research – more on that in a moment.

The reporters used a two-fold approach to the story: First they took emissions samples from an airplane, and then they followed those up with ground-level FLIR videos. This presents significant limitations.

First, not only do FLIR videos not identify the substance being emitted, but they also can’t measure quantity. Even Earthworks – the “Keep It In the Ground” (KIITG) group that likened fracking to “rape” and has been pushing the use of FLIR imagery as part of its agenda “to stop using fossil fuels” in Texas and elsewhere – has admitted,

“We can’t say which VOCs [volatile organic compounds] or how much.”

Nonetheless, the Times claims to have “identified large-scale releases” by “using a powerful infrared camera,” and one of the co-authors encouraged people to reach out to Earthworks: 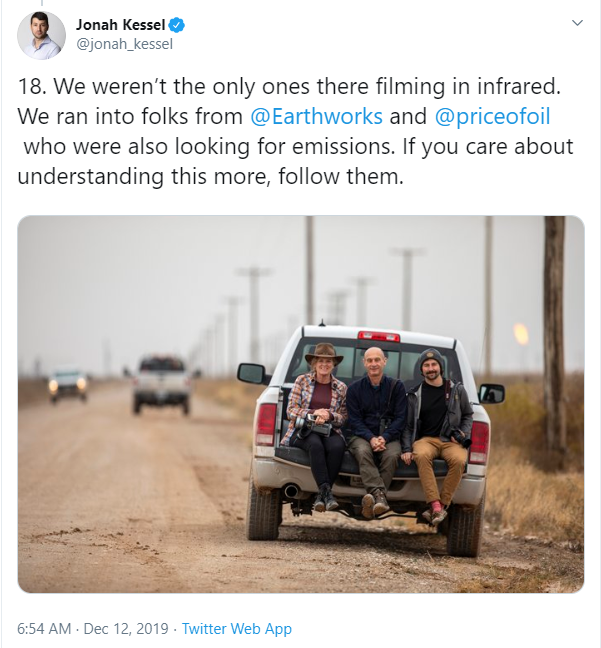 Despite this social media shout-out, Earthworks isn’t mentioned in the article, but at least one of the facilities it has targeted in the past is. The group filed two complaints in 2017 for “unauthorized emissions” at a facility also identified by the Times, and both times the Texas Commission on Environmental Quality determined there were no violations.

Despite this social media shout-out, Earthworks isn’t mentioned in the article, but at least one of the facilities it has targeted in the past is. The group filed two complaints in 2017 for “unauthorized emissions” at a facility also identified by the Times, and both times the Texas Commission on Environmental Quality determined there were no violations. 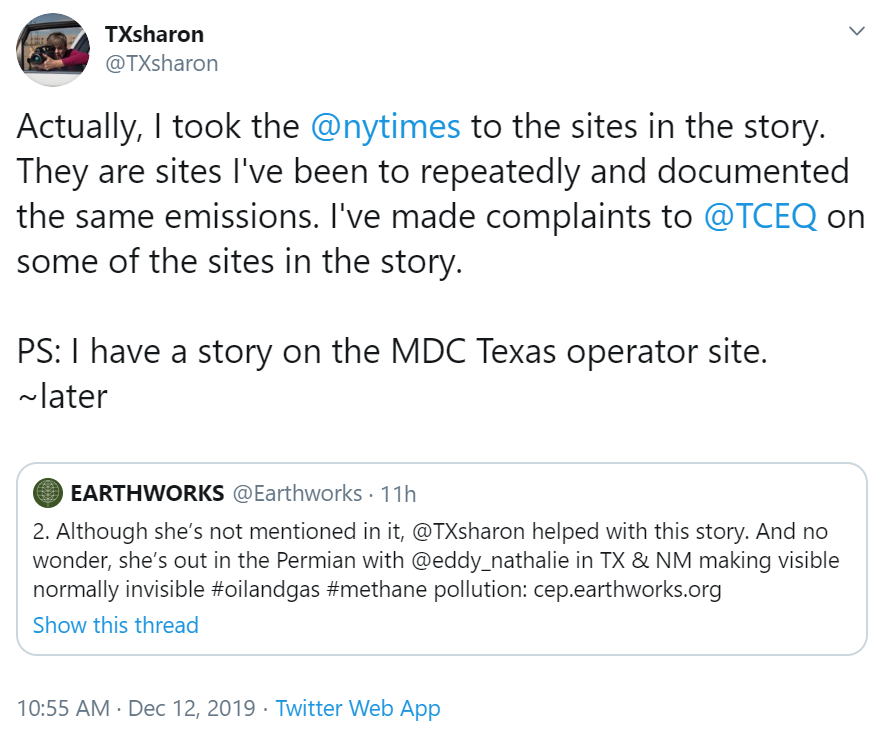 The reporters did take emissions measurements as part of their research; however, these were done prior to taking the FLIR imagery. 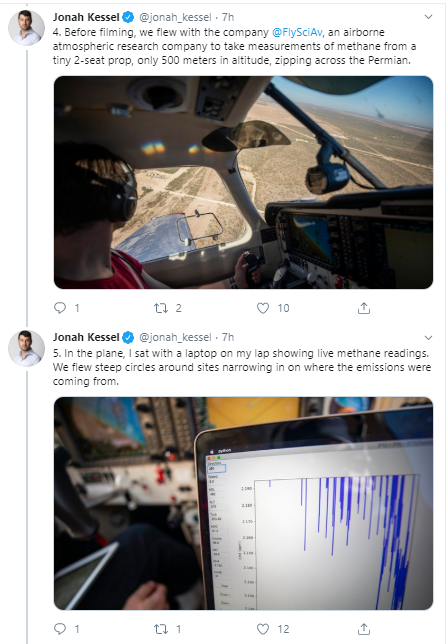 As one of the authors explained on Twitter, this presented some challenges for the FLIR videoing – like they couldn’t actually verify if they were filming the sources of alleged emissions spikes identified during their flight. 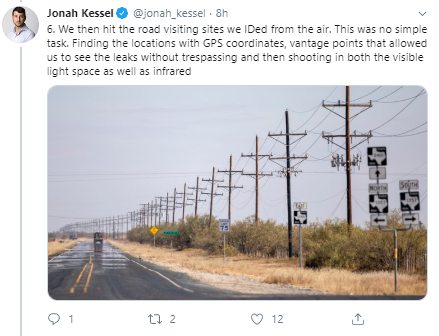 Further, using only this “top down” measurement approach has been criticized for producing higher emissions readings and not taking into account other sources. In particular, a recent NOAA study finds that top-down studies have likely overestimated emissions by mischaracterizing episodic emissions as normal, and the National Academy of Sciences has cautioned against using only one source of emissions measurements:

“Coordinated, contemporaneous top-down and bottom-up measurement campaigns, conducted in a variety of source regions for anthropogenic methane emissions, are crucial for identifying knowledge gaps and prioritizing emission inventory improvements. Careful evaluation of such data for use in national methane inventories is necessary to ensure representativeness of annual average assessments.”

Time of day also plays a role in the accuracy of readings, particularly when it is being assumed that these incidents are ongoing and not episodic – an easy assumption to make in an article littered with phrasing like, “a major release of methane.”

As the NOAA study describes, aircraft measurements are typically collected around noon in order to get the best readings. This happens to be roughly the same time emissions from routine maintenance operations typically conducted in the late morning — such as manual liquids unloading — are at their maximum levels in the atmosphere, leading to anomalous emissions:

“[E]pisodic sources can substantially impact midday methane emissions and aircraft may detect daily peak emissions rather than daily averages that are generally employed in emissions inventories.”

Fact 4: The Times Fails to Disclose Activist Ties For Its Sources

In addition to the reporter’s shout-out to a major national KIITG activist group on social media, the Times fails to disclose that at least one of its sources has deep ties to another such group.

Robert Howarth, who is cited in the article as a Cornell University professor and author of a study on methane emissions, also happens to sit on Food and Water Watch’s board of directors – a KIITG group that boasts its board consists of “leaders in activism” and prides itself on being “the first U.S. national organization to call for a ban on fracking.”

In fact, Howarth’s study mentioned in the story was also funded by the Park Foundation – one of the largest funders of anti-fracking research and activism – and peer-reviewed by a member of Earthworks’ Board of Directors. Not to mention, Howarth’s conclusions were called “far-reaching” and “premature” by one of the anonymous experts tasked by Biogeosciences to review the research prior to publication.

The U.S. oil and natural gas industry has made great strides in reducing emissions, and continues to invest in technology to further improve in this regard. And it shows: Since 1990, oil and natural gas production has grown 80 and 51 percent, respectively, while methane emissions have decreased 14 percent.

The abundance of natural gas being produced in the United States has made it possible for greater use of the resource across the country, resulting in 57 percent more emissions reductions than renewables since 2005.

Leaving this context out of the story does a disservice to the public. Getting a key fact about what they showed to readers so wrong is an inexcusable error of judgment.