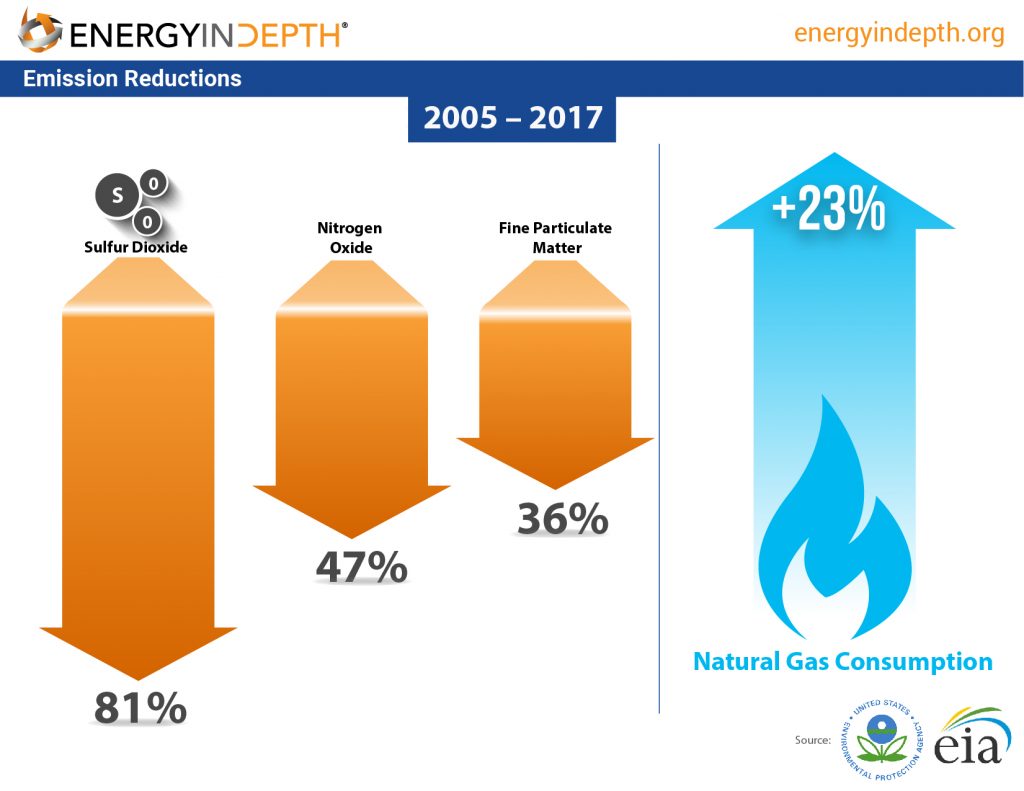 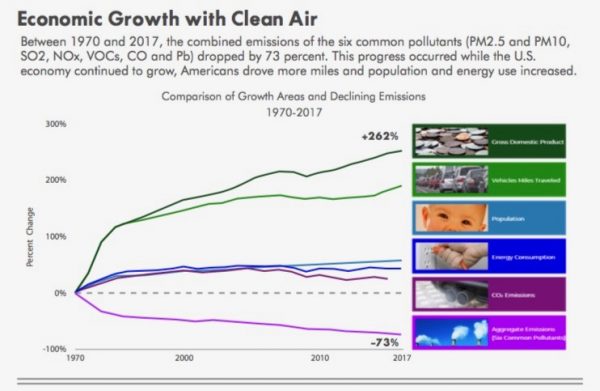 And though the report correctly gives credit to the 1970 Clean Air Act for initiating the trends detailed above, EPA’s rather cryptic acknowledgement of the shale gas revolution’s role in continuing this progress was lacking to say the least. From the report:

“The U.S. leads the world in having clean air and a strong economy due to implementation of the Clean Air Act and technological advancements from American innovators…”

Translation on that highlighted text: largely because of abundant natural gas, made possible by fracking.

It’s an important point that the media continues to completely ignore, despite the clear evidence of natural gas’ role in these trends. The following charts from the report pretty much tell the tale, showing emissions of the six major “criteria” pollutants have declined significantly since 2005 at the same time natural gas consumption has increased 23 percent.

Most notably, EPA data show that emissions of sulfur dioxide (SO2), nitrogen oxide (NOx) and fine particulate matter (PM2.5) — widely viewed as the most harmful air pollutants — have collectively declined 55 percent since 2005. This can be traced directly to the fact that clean-burning natural gas —which has been made affordable and abundant by advances in hydraulic fracturing and horizontal drilling technology — emits virtually no SO2 and far less NOx than other traditional fuels. SO2 and NOx emissions also lead to PM2.5 formation, which means that increased natural gas use can be partially credited for reducing particulate matter pollution as well.

It is also no coincidence that the U.S. GDP has increased more than 20 percent since 2005, which is roughly the same time that the shale gas revolution began.

Here is a closer look at how the EPA report further confirms the shale gas revolution is reducing air pollution.

The report shows that SO2 emissions have declined 81 percent since 2005.

As EPA describes, “The largest source of SO2 in the atmosphere is the burning of fossil fuels by power plants and other industrial facilities.”

That said, SO2 emissions have decreased dramatically in the United States thanks largely to the 81 percent increase in natural gas use for power generation since 2005 — going from representing 18 percent of the total electricity generation to 33 percent. This has had enormously positive public health implications.

EPA describes SO2 as being “of greatest concern” with regard to health, due in large part to the fact that it combines with other pollutants to form deadly PM2.5 and can trigger asthma attacks. EPA notes:

“Short-term exposures to SO2 are linked with respiratory effects including difficulty breathing and increased asthma symptoms. These effects are particularly problematic for asthmatics while breathing deeply such as when exercising or playing. Short-term exposures to SO2 have also been connected to increased emergency department visits and hospital admissions for respiratory illnesses, particularly for at-risk populations including children, older adults and those with asthma. SO2 contributes to particle formation with associated health effects.”

Similarly, the report shows that NOx emissions have declined 47 percent since 2005.

As the EPA report notes:

“Oxides of nitrogen react with volatile organic compounds to form ozone and react with ammonia and other compounds to form particle pollution resulting in associated public health and environmental effects. Deposition of nitrogen oxides contributes to the acidification and nutrient enrichment (eutrophication, nitrogen saturation) of soils and surface waters. These effects can change the diversity of ecosystems.”

“Ground-level ozone forms when emissions of NOx and VOCs react in the presence of sunlight.”

Ironically, anti-fracking activists have repeatedly claimed that oil and natural gas development has led to increases in ground level ozone. But this latest EPA data confirms an inconvenient reality for the “Keep It In the Ground” movement: the shale gas boom has significantly reduced NOx emissions and, subsequently, ozone levels, which have declined 22 percent since 2005.

PM2.5 is a byproduct of chemical reactions between a number of pollutants, most notably NOx and SO2, and can present a myriad of health and environmental challenges, according to the EPA:

“Exposures to PM, particularly fine particles referred to as PM2.5, can cause harmful effects on the cardiovascular system including heart attacks and strokes. These effects can result in emergency department visits, hospitalizations and, in some cases, premature death. PM exposures are also linked to harmful respiratory effects, including asthma attacks.”

PM2.5 is responsible for literally millions of deaths worldwide. But thanks largely to increased natural gas use, direct U.S. PM2.5 emissions have declined 36 percent since 2005, according to the new EPA report.

The shale gas revolution’s huge role in improving U.S. air quality is also evidenced by the fact that the number of unhealthy air quality days in the United States was down 63 percent from 2005 levels (1,990 to 729) in 2017.

“Through federal and state implementation of the Clean Air Act and technological advances in the private sector, America has achieved one of the great public-private successes of our time – dramatically improving air quality and public health while simultaneously growing the nation’s population and economy. This report details a remarkable achievement that should be recognized, celebrated, and replicated around the world. A 73 percent reduction in any other social ill, such as crime, disease, or drug addiction, would lead the evening news.”

He is absolutely right that these dramatic air quality improvements are something to celebrate. And they continue to happen largely because of increased natural gas use made possible by fracking – a phenomenon that deserves more recognition.