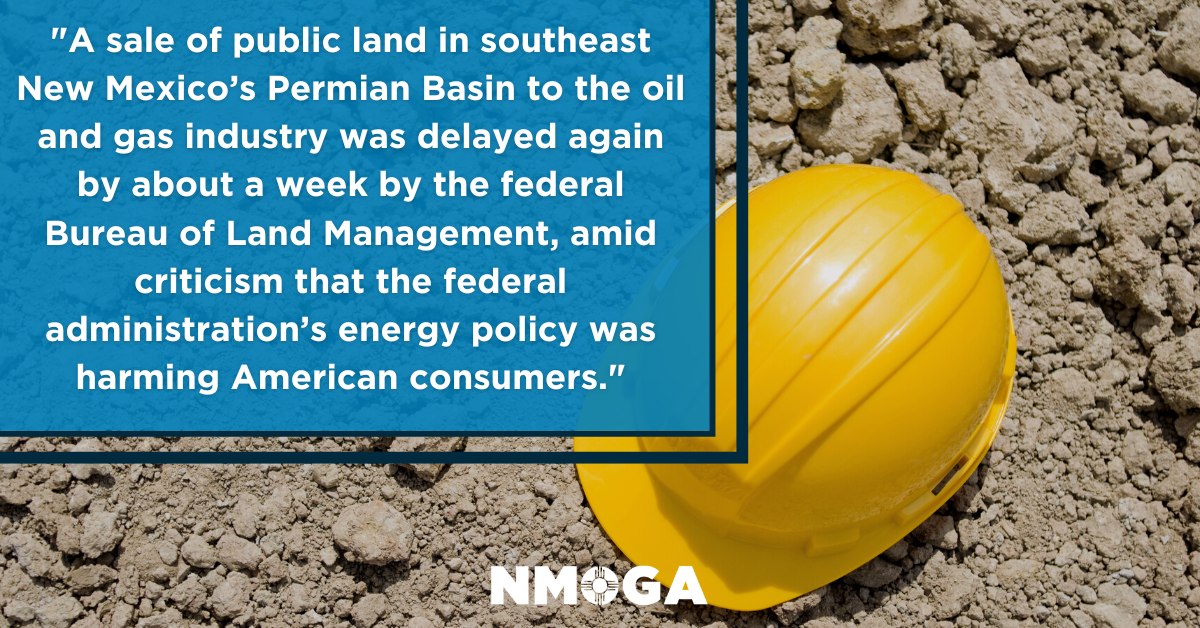 A sale of public land in southeast New Mexico’s Permian Basin to the oil and gas industry was delayed again by about a week by the federal Bureau of Land Management, amid criticism that the federal administration’s energy policy was harming American consumers.

Environmentalists were also critical of the administration of President Joe Biden for scheduling the sales, after the President during his term and along the campaign trail vowed to reduce pollution caused by extraction in the U.S.

When Biden first took office, the Department of the Interior which oversees the BLM placed an indefinite pause on federal lease sales of public land to energy companies for oil and gas operations as the agency reevaluated its fossil fuel programs.

A federal judge in Louisiana later filed an injunction against the pause on leasing and the Department scheduled several throughout the country, including a sale of about 500 acres of public land on six parcels in Lea and Chaves counties.

After months of intensified environmental and climate change analysis, the New Mexico lease sale was scheduled for June 16.

But records show on June 6, the sale was delayed again to June 23.

BLM New Mexico spokesperson Allison Sandoval said the extra week was needed to allow the agency to complete its environmental review under the National Environmental Policy Act (NEPA) and resolved protests of the sale.

Energy industry leaders and local leaders in the Permian Basin area chided the Biden administration for disrupting what they said was an essential economic driver of the region.

More than half of oil and gas production in New Mexico occurs on federal land, with most of those operations in the southeast corner that shares the Permian with West Texas.

New Mexico is second in the nation, after Texas is oil production which makes up more than a third of the State’s budget.

In comparison, Texas’s oil and gas operations are mostly on private land an unimpacted by federal decision making, leaving many in New Mexico concerned their state was uniquely vulnerable to shifts in energy policy.

Larry Behrens, spokesman for Power the Future based in Santa Fe said the delays in sales and other policies of the Biden administration related to oil and gas were chiefly responsible for rising energy costs.

The national average gas price rose to more than $5 a gallon in early June, with AAA reporting it at about $5.02 a gallon on Tuesday, with New Mexico’s average at $4.8 a gallon.

Behrens was critical of Biden, who recently visited Santa Fe as New Mexico wrestled with historically devastating wildfires, fires many believe were fueled by climate change brought on by the use of fossil fuels.

The U.S. Forest Service admitted to accidentally starting the Hermits Peak Calf Canyon Fire in April, which grew to more than 300,000 acres – the largest in New Mexico’s history.

“New Mexico’s families are struggling with record gas prices, the threat of blackouts and the impact of these terrible fires and they deserve more from Joe Biden than a quick visit with his political friend in Santa Fe,” Behrens said.

Power the Future Executive Director Daniel Turner said the administration must support U.S. oil and gas to provide solace to consumers, rather than following the agenda of the environmental community.

“In his heart of hearts, Biden knows unleashing American energy will fix the pain our families are enduring, but he doesn’t care because his cult green ideology is his highest priority,” Turner said. “Sadly, this historic failure will not be the last one forced on Americans before this administration faces a reckoning in November.”

But environmental groups said the fires were further proof that the government should cease providing land to the oil and gas industry for its operations.

“President Biden's massive public lands giveaway in the face of utter climate catastrophe is just the latest sign that his climate commitments are mere rhetoric,” she said “The more public lands sacrificed to Big Oil, the more economic damage, death, and destruction baked into our future.

“To stave off the worst of climate change, Biden must keep his promise and end all new leasing on public lands and waters.”