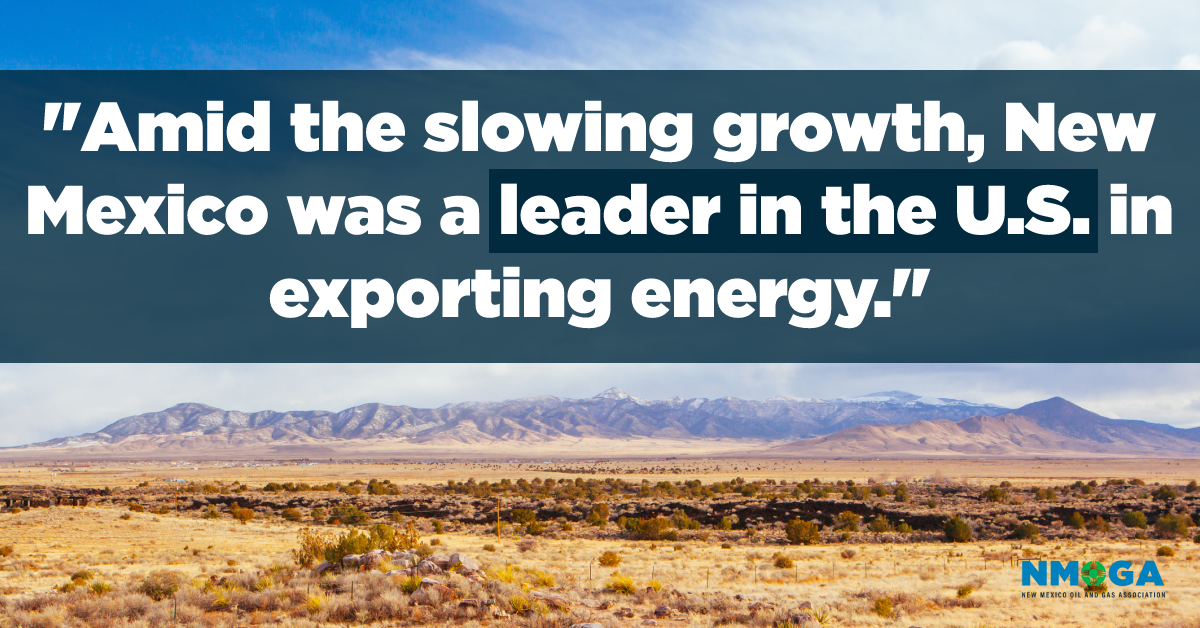 Oil and gas production in New Mexico set another record for 2020 even as COVID-19 decimated fuel demands and the market struggled.

Although 2020’s total was the highest since the OCD began tracking oil production in the 1970s, growth declined from an about 33.2 percent increase between 2018 which had a total of about 248.9 million barrels of oil produced to 2019.

But like oil, natural gas’ production growth declined between 2019 and last year, increasing by about 7 percent compared with a 19 percent growth between 2018 and 2019, records show.

Amid the slowing growth, New Mexico was as a leader in the U.S. in exporting energy, per a report from Commodity.com, a commodity market analytics firm.

New Mexico was ranked fourth in the nation in energy exports, per the report, based on the latest data from the Energy Information Administration.

The latest records show New Mexico exporting about 1.3 billion British thermal units (tus) of energy per person, placing the state only behind West Virginia with 2.2 billion Btus per capita, North Dakota with 4.6 billion and Wyoming at 12.3 billion btus per resident of that state.

The report pointed to a decline in exports for coal-producing states but contended that natural gas continued to be an important source of energy and production could continue to ramp up in the future.

“Within the US, states have different levels of production and consumption affecting their import and export levels as well,” the report read.

“While some states — especially those that produce coal in large numbers — have suffered in the transition between fuels, others have dramatically increased their energy production. As a result, these states are now producing far more energy on a per capita basis than peer states are.”

And that production could continue to mean dollars for New Mexico’s public services like schools.

In its annual report on revenue brought into the state by the oil and gas industry, the New Mexico Oil and Gas Association (NMOGA) reported $2.8 billion was generated by oil and gas production in 2020, including $1.4 billion for public education.

Robert McEntyre at NMOGA said New Mexico continue to be a “focal point” of the oil and gas industry in 2020, despite the pandemic, as companies sought to reanalyze their assets and focus on areas with the best returns.

“When prices began to decline, producers assessed their inventory and took a look at their wells. They really examined their portfolios to determine where they should produce to maximize their investments,” he said.

“The conclusion was that New Mexico was the place to continue to produce despite the market’s declines. Producers are concentrating their investments and activities in the areas that are most prolific, and for many that meant New Mexico and the Permian Basin were top on the list.”

In the wake of the pandemic striking New Mexico and the nation in March 2020, oil prices plummeted as fuel demands slump following numerous travel and business restrictions aimed at slowing the virus’ spread.

By April 2020, the price per barrel of domestic oil fell to -$40 per barrel and the State of New Mexico saw a $400 million deficit created by the market collapse and subsequent decline in value for oil produced in the state.

It was a difficult time for oil and gas in New Mexico, McEntyre said, but was weathered due to the vast shale deposits of oil and natural gas in the state.

He pointed to the OCD’s recently enacted methane regulations supported by the industry, calling for operators to capture 98 percent of produced natural gas by 2026, as an example of the industry collaborating with regulators to ensure environmental concerns are addressed while production is allowed to grow.

“We believe that New Mexico really has been a focal point of the global oil and gas industry and it can continue to be if there is a reliable regulatory environment,” McEntyre said.

“We certainly want to be a leading producer but also a leader in responsible production of oil and natural gas. We are confident we do that and there are significant opportunities in New Mexico.”