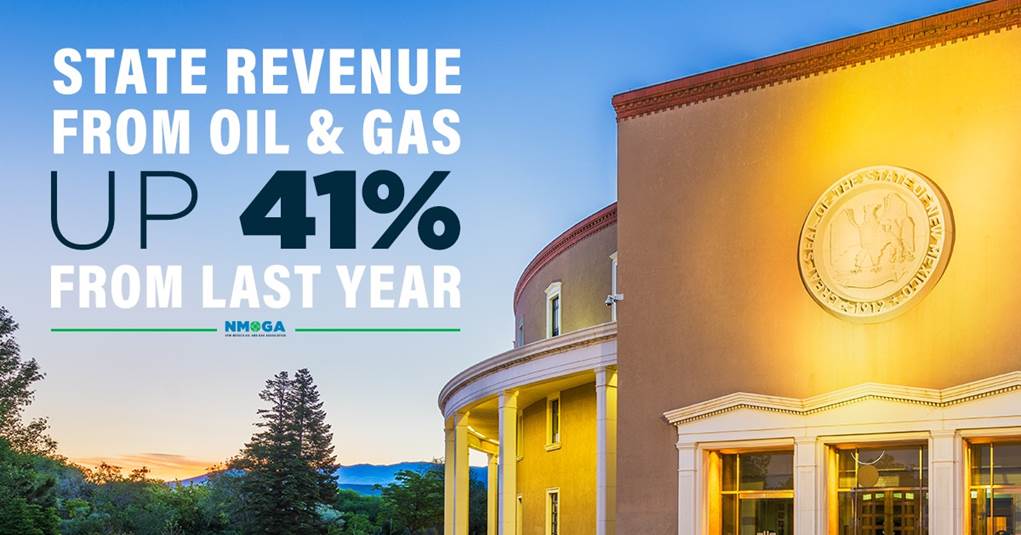 Oil and gas production in New Mexico generated about $3.1 billion in revenue for the State last year, which marked the first year such revenue surpassed $3 billion, per data from the New Mexico Tax Research Institute.

Between 2018 and 2019, revenue generated by oil and gas operations grew by more than $910 million, records show, contributing about 39 percent to New Mexico's General Fund.

Executive Director of the New Mexico Oil and Gas Association Ryan Flynn said the record highs were the “new norm,” and he expects the industry’s gains to continue for the next 10 years.

“What we see is record production and record revenue becoming the new norm,” Flynn said. “Historic levels of revenue are being generated by the industry, but we don’t see that going away anytime soon.”

The industry provided about a third of New Mexico’s funding for public schools, for a total of about $1.4 billion in revenue, read the report.

With the New Mexico Legislature entering its annual lawmaking session next week, Flynn said he hopes oil and gas revenue will be used to support public services such as education and roads.

“We hope to see the state invest the revenue in benefits like public education and infrastructure,” Flynn said. “We want the state to leverage the strength of this industry to the benefit of all New Mexicans.”

New Mexico Gov. Michelle Lujan Grisham announced the start of the 30-day session on Wednesday to begin on Jan. 21, listing her priorities in funding early childhood education programs and the New Mexico Opportunity Scholarship which would provide free college education for New Mexicans attending a college or university in the state.

“Year One was a tremendous start, and I’m incredibly enthusiastic about the opportunity to keep building on that foundation over the next month – indeed, over the next year and beyond,” Lujan Grisham said. “My call for this legislative session underscores the work we are undertaking on two fronts: addressing urgent needs and strategically investing in sustainable improvements over the long term.”

She urged lawmakers to support spending initiatives for education and infrastructure and hoped to eliminate about $6.6 billion in unfunded liabilities while reinvesting in the State’s pension fund to make it solvent in 25 years.

“These proposals are investments in the present well-being and future success of students, workers, kids and parents all across New Mexico,” Lujan Grisham said. “These are quality-of-life initiatives I am proud to introduce and support.

“My call underscores our rock-solid commitment to investing for tomorrow, delivering today. I look forward to working with the Legislature to make a positive, meaningful difference for New Mexicans.”

Flynn called on the governor to push funds to the southeast region of New Mexico, where most of the state’s oil production occurs.

He said Eddy County generated about $40.5 million in revenue last year and neighboring Lea County brought in about $49.7 million.

Revenue generated by southeast New Mexico should be used to support those same communities, Flynn said.

“That’s the region that is producing most of the revenue,” Flynn said of the southeast. “We need to make sure the places where the revenue is generated can stay strong. We certainly want to work with the State and local communities.”