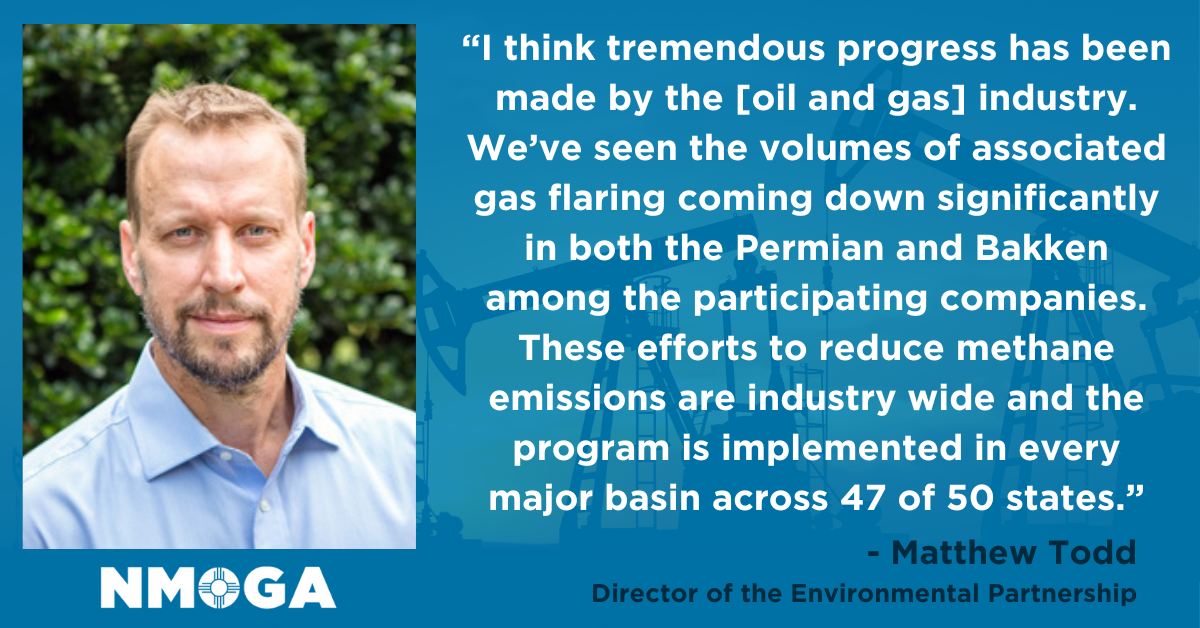 A group of oil and gas companies, including some of the biggest operators in southeast New Mexico’s Permian Basin oilfields, touted progress they said they made to reduce air pollution using market-driven solution as government regulations intensified in response to growing climate change threats.

The Environmental Partnership, made up of about 100 energy companies nationwide, was formed in 2017 by the American Petroleum Institute as a voluntary means for operators to employ new technologies and practices intended to reduce pollution.

NMED’s rules enacted this year were intended increase reporting, repairs and detection of gas leaks at facilities in the state’s main oil and gas regions – the southeast Permian and northwest San Juan basins – known for elevated levels of ground-level ozone, which is formed when oil and gas-originating volatile organic compounds (VOCs) interact with sunlight.

EMRND’s regulations went into effect last year, adding more requirements for reporting emission events, restricting flaring to only be used in emergencies, and requiring operators to capture 98 percent of produced gas by 2026.

Flaring is the burning of excess natural gas, often used as a safety measure to pressurize a well.

Despite these stricter state requirements, the federal Environmental Protection Agency planned to rule before October if it would list the Permian Basin – both the Texas and New Mexico sides – in “non-attainment” of federal air quality standards, potentially unleashing heavy federal requirements that would slow permitting and thus production of oil and gas.

Matthew Todd, director of the Environmental Partnership, said the industry was already making progress on reducing emissions ahead of the rules, the impact of which could take several years to materialize.

“Production companies are making sure they have adequate gas gathering infrastructure to get that gas to market, and we’re promoting the practices to ensure flares are operating properly when it does occur,” Todd said.

He pointed to the Permian Basin in New Mexico and Texas, along with the Bakken region in North Dakota, as shale regions where emission-reduction efforts are particularly focused.

Those two regions lead the U.S. in oil production as the Energy Information Administration, in its latest report from Sept. 12, forecast the Permian to grow next month by 66,000 barrels per day (bpd) for an all-time high of about 5.4 million bpd in October.

The Bakken was also expected to grow in October by 21,000 bpd, per the EIA, for a toral of about 1.2 million bpd next month.

Together, the Permian and Bakken make up more than half, about 56 percent, of the EIA’s forecast average U.S. oil production of about 11.8 million bpd in 2022.

“I think tremendous progress has been made by the industry,” Todd said. “We’ve seen the volumes of associated gas flaring coming down significantly in both the Permian and Bakken among the participating companies.”

The work could also expand to see similar progress in other major U.S. basins, he said, including the Marcellus shale in Pennsylvania, Eagle Ford in southern Texas and the Anadarko Basin in Oklahoma.

“These efforts to reduce methane emissions are industry wide and the program is implemented in every major basin across 47 of 50 states,” Todd said.

But environmentalists worried industry-reported air pollution reductions could be unreliable, and worsening climate change was proof that problem was getting worse, not better.

Kaley Shoup with Carlsbad-based environmental group Citizens Caring for the Future pointed to a small number of state compliance staff she said would be unable to accurately devise the true magnitude of oil and gas’ air pollution in New Mexico.

“I don’t trust that they are cutting emissions as much as they say they are,” Shoup said of industry-reported emission data. “Until they have someone out there that is independent to verify that is happening, I don’t trust it.

“There’s no one that is not being paid by the company that is verifying that is true.”

She said the group expected to hear in October from the U.S. Environmental Protection Agency about a grant it applied for to fund an independent monitoring station in the Carlsbad area.

That kind of work is important, she said, to mitigate the effects of oil and gas on the local environment and the threats it could pose to the safety of residents now, and after finite sources and the fluctuating value of fossil fuel are gone.

“While we will still have oil and gas in this region, markets are going to change,” Shoup said. “That could leave us in a lurch.

“It’s really getting folks to think more dynamically. Let’s preserve our land and make sure we have all those things of value so we can tap into them when the industry shifts.”