Oil And Gas Operators Push For Use Of Recycled Water 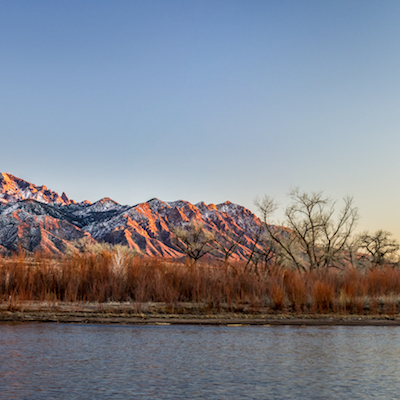 Millions of gallons of water are needed to produce oil and gas, and in the water-challenged Permian Basin, that can mean problems with balancing the demands of the public, agriculture and the energy industry.

The University of Texas of the Permian Basin hosted its first annual Permian Basin Water in Energy Conference on Wednesday at the Horseshoe Pavilion and presented a forum to discuss the myriad issues surrounding water use.

“This is an opportunity to learn from each other about this ancient and essential element to our lives,” UTPB President Sandra Woodley said in her opening statement.

A major subject throughout the day was the recycling and reuse of produced water for exploration operations in order to have less impact on vital fresh water supplies.

What’s next for efforts to eliminate the use of fresh water and increase the use of recycled and reused water is increased collaboration among operators, reusing more produced water, coordinating drilling and completion schedules, reducing water disposal and reducing frac hits on neighbor wells, Hussey said.

Robert Huizenga, water resources manager with Cimarex Energy, said he is passionate about the fact that operators don’t need to do a lot of processing to reuse produced water. He said his company uses a filter and trusts that the chemicals in the frac fluids are sufficient friction reducers. He said the company’s goal is to use 100 percent produced water for future frac jobs or dispose of the water.

Ryan Marshall, water resources manager with Callon Petroleum, said his company used 100 percent non-potable water on three projects in one area. The water was 80 percent brackish Santa Rosa water and 20 percent produced water. “We want to get that to 50-50,” he said, adding the company’s ultimate goal is to use 100 percent produced water in its operations. “It’s the right thing to do, and it makes economic sense. It helps on the fracturing side and on the disposal side,” he said.

Basic Energy’s customers are demanding the use of less fresh water and more recycled and reused water, said James Newman, senior vice president with the company. He said the company uses filtration and oxidization methods to recycle the water it uses.

“The Permian Basin has lagged in water recycling and is in its infancy in reusing water,” he said.

Here are some other highlights from Wednesday:

— CRMWD declines: Water deliveries from the Colorado River Municipal Water District, which supplies 70 percent of the city of Midland’s water, have fallen about 23 percent over the past 10 years while the population of the three member cities — Odessa, Big Spring and Snyder — have climbed 20 percent to total about 150,000. John Grant, the district’s general manager, attributes the decline to the impact of the severe drought that began in 2011.

Municipalities such as Midland built infrastructure during that time to bring water in. Midland, for example, constructed a pipeline to the T Bar Ranch, and the cost of those projects is built into the water rates charged city customers. Those rising rates have likely prompted the drop in usage, he said.

Jacobs and Elizabeth Newlin Taylor of law firm Taylor & McCaleb of Albuquerque, New Mexico, presented the many differences between Texas and New Mexico. Perhaps the biggest is who owns the water. Jacobs said surface water in Texas is owned by the state but that groundwater is private property. In New Mexico, surface and groundwater are public property, Taylor said.

Produced water is private property in Texas because it’s considered groundwater. In New Mexico, produced water is regulated by the Oil Conservation, as opposed to the Office of the State Engineer, which is the primary water regulator. A permit or registration isn’t required to use produced or recycled water on-site. Instead, reports on how much is being used must be submitted monthly. Off-site water recycling facilities and containments must be permitted or registered. Taylor said there are 27 recycling facilities in New Mexico.

Texas has about 100 groundwater districts that are formed not by aquifer boundaries, but by political lines, namely counties. In New Mexico, districts generally follow hydrologic boundaries, and there are 33 basins designated in the state.

— Plenty of interest: Organizers had expected its inaugural conference to attract about 150 attendees; however, more than 400 people registered, including two from Tokyo, Japan. The conference website garnered more than 15,000 views, including from Europe, Asia and the Middle East. This first conference is a four-day event.