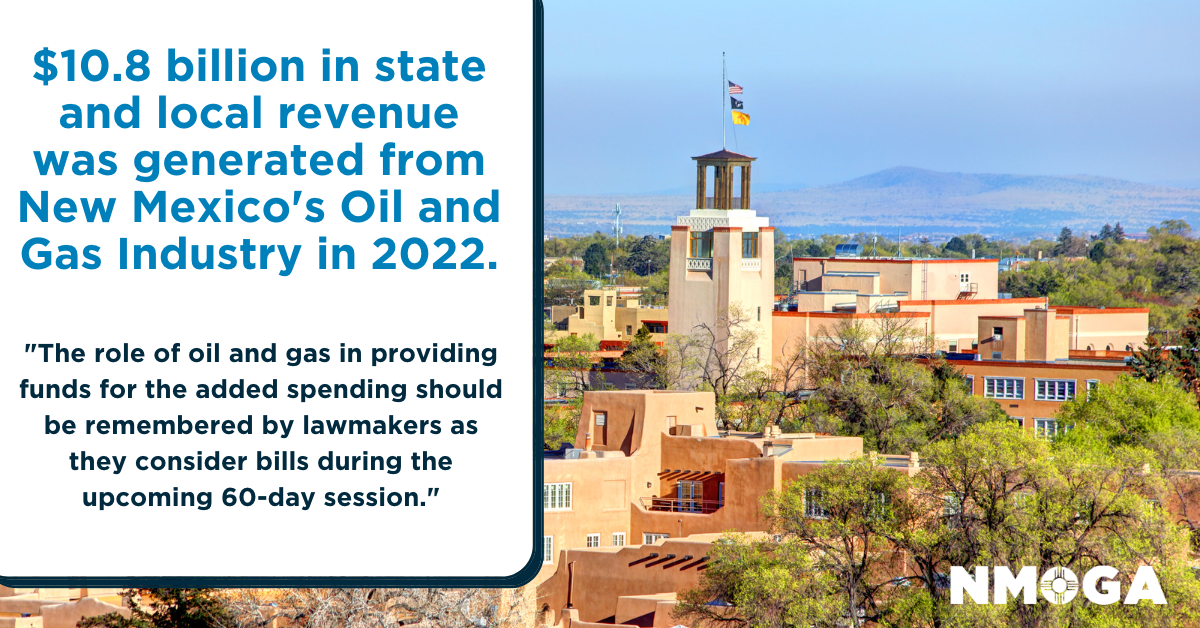 Bolstered by a surging oil and gas industry in the state, New Mexico lawmakers and the Gov. Michelle Lujan Grisham aligned in recommending $9.4 billion in spending for the next fiscal year for the legislature to consider in the upcoming session starting next week.

Both the executive budget recommendation from Lujan Grisham and the budget proposed by the Legislative Finance Committee entailed a 12 percent spending increase from last year, as oil and gas revenue continued to grow providing largely for an about $3.6 billion funding surplus.

Priorities for the governor and committee included expansions of early childhood education, public schools and for healthcare.

She also proposed about $277 million in childcare investments, along with $220 million to extend in-classroom learning time, according to the announcement of Lujan Grisham’s recommendation.

Another $200 million would go to establish a Rural Health Care Delivery Fund, should the governor’s proposal be approved by lawmakers, along with funds to provide rental assistance and mobile homelessness response teams within the Department of Health.

The LFC’s recommendations included $109 million to expand pre-kindergarten, along with $263 million in recurring and $261 million in nonrecurring to fund public schools, with its plan for public education totaling about $4.1 billion – a 6.8 percent bump from the current fiscal year.

The governor planned to maintain reserves of 34.9 percent of spending, while the LFC’s had them at 30 percent.

“This budget builds upon the immense progress and success of the last four years, continuing to improve the lives of the people of New Mexico by funding programs, policies and initiatives that we know are working,” Lujan Grisham said in a statement following the release of her budget proposal.

“It’s cliché but funding today’s children is funding New Mexico’s future,” she said. “This year we have an opportunity to do more than ever to give our kids a strong start.”

But all that spending was tied to the state’s fossil fuel industry, driven by extraction in the southeast Permian Basin New Mexico shares with West Texas.

It’s the most active oilfield in the U.S., producing up to 5.5 million barrels per day (bpd) – about half of the nation’s output.

Due largely to Permian Basin production, New Mexico ranks second in the U.S. for crude oil output, following only Texas.

Throughout 2022, the market for domestic oil grew as the world recovered from the COVID-19 health crisis and nations sought to limit imports from Russia after its invasion of Ukraine.

That caused U.S. oil prices to soar, and production to boom in the Permian.

New Mexico also ranked second only to North Dakota in oil production per capita, the LFC noted, surpassing Alaska, Colorado and Texas, meaning the state was the “second-richest” in the U.S. for per-person tax revenue from fossil fuel.

State economists did warn about potentially volatility in the energy market, known for dramatic up and down swings, meaning fiscal discipline was important even during boom times.

“New Mexico production, driven by activity in the Permian Basin, is expected to continue to grow, although revenues from oil production continue to be volatile, fueling a boom-and-bust budget cycle,” read the LFC report.

“Oil and gas are always unpredictable, and a recession is still a threat,” he said. “However, with this level of income, we have the opportunity to set New Mexico up to never have to ride the oil and gas rollercoaster at the same time we maintain strong reserves.”

The role of oil and gas in providing funds for the added spending should be remembered by lawmakers as they consider bills during the upcoming 60-day session, said Larry Behrens, spokesman for fossil fuel advocacy group Power the Future.

Behrens worried policy makers would introduce measures that could seek to transition New Mexico away from fossil fuels and tighten restrictions on the industry.

He was critical of a $4.1 million appropriation in the governor’s recommendation to fund climate change initiatives at the New Mexico Environment Department, along with another $5.9 million earmarked to aid in the “energy transition” by providing dollars to fund energy projects alternative to fossil fuels.

The governor also recommended a $2 million special appropriation at NMED the agency requested to fund increases in staffing and administrative worked tied to the U.S. Environmental Protection Agency’s expected action this year to deem the Permian Basin region in violation of federal air quality standards, a move tied to ozone pollution from extraction facilities in the area.

“Governor Lujan Grisham has proudly said we need to transition away from fossil fuels, but she sure can’t seem to transition away from spending the revenue,” Behrens said. “Before taxpayers foot the bill for more of the governor’s green pet projects, it’s past time for an examination on the Governor’s past initiatives to see if they’ve delivered on her over-hyped promises.”

“New Mexico is home to one of the most diverse landscapes in the U.S., yet the state has no permanent source of conservation funding,” Fallon said.

“Thanks to dual leadership from the Governor and legislative champions, the fund is poised to infuse a meaningful amount of money into protecting and restoring the lands and waters that are vital to the cultural heritage and economic lives of New Mexicans.”