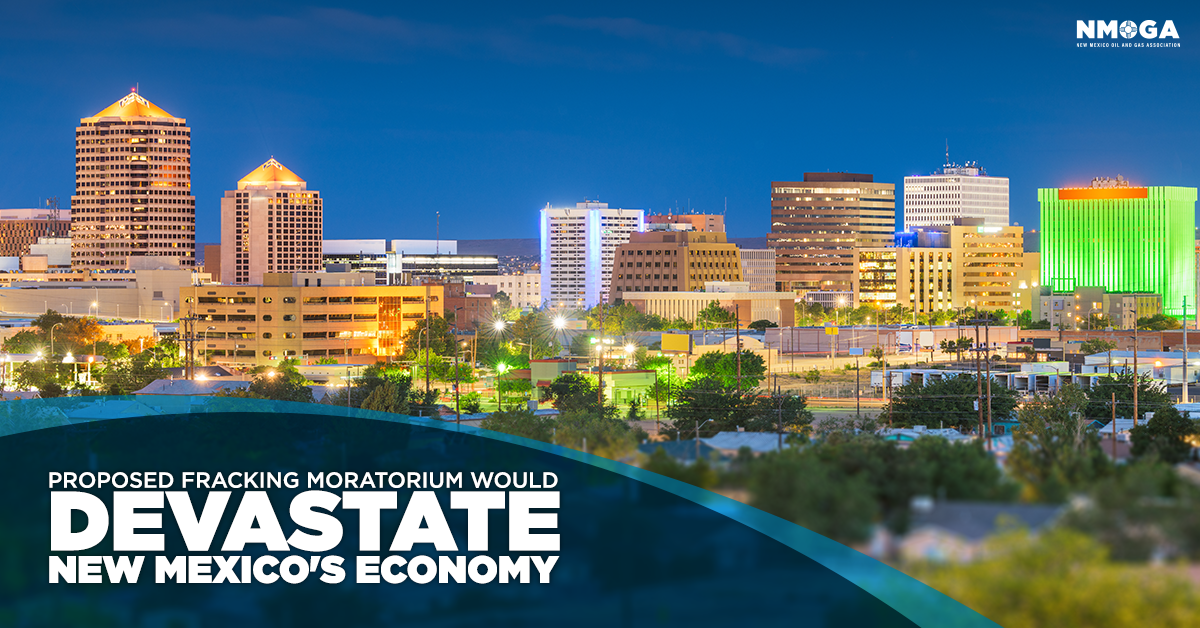 A proposal introduced for the second consecutive year in New Mexico because of erroneous environmental concerns would establish a four-year ban on new hydraulic fracturing permits and would imperil the state’s financial situation.

Hydraulic fracturing, also known as “fracking,” is the process that enables the cost-effective extraction of once-inaccessible oil and natural gas deposits several miles below the Earth’s surface. If passed, the ban would be in place until June 1, 2024.

A similar ban, introduced last year, “would [have caused] severe revenue losses” to state and local governments, according to a fiscal impact report released by the Legislative Finance Committee. “Direct revenues from [the oil and natural gas] industry – including severance and production taxes, bonuses and royalty payments on state and federal lands, and gross receipts taxes (GRT) – make up about 35 percent of the entire FY19 general fund revenue estimate.” The report estimated this ban would cost the state government a rough total of $3.5 billion and local governments $327 million in lost revenues. Also, the report noted this estimate “should be considered a minimum impact, as it assumes current oil and gas production remains constant.”

Because of fracking, natural gas prices were roughly a third lower in New Mexico in 2016 than 10 years prior, leading to $1.6 billion in savings over that period for residential consumers. This is significant because roughly 400,000 New Mexicans live in poverty, and the average New Mexico resident at or below the poverty level spends around a quarter of their take home pay on energy costs. Additionally, commercial and industrial consumers saved $1.86 billion during the same period.

Moreover, the oil and natural gas industries supported more than 90,000 jobs in New Mexico—8.3 percent of the state total—in 2015. These vital industries produced more than $5.2 billion in labor income and accounted for $12.8 billion in economic impact, according to a 2017 American Petroleum Institute study prepared by PricewaterhouseCoopers. The Land of Enchantment is now the third-largest oil producing state, behind only Texas and North Dakota.

A 2019 study from the Global Energy Institute at the U.S. Chamber of Commerce finds a total ban on fracking in New Mexico would result in the loss of 142,000 jobs across the state by 2025, or 15.8 percent of the state’s total workforce. “To put this potential loss in perspective,” the report notes, “more jobs supported by the oil and natural gas industry would be lost in the first year of a hydraulic fracturing ban than the total number of jobs that all New Mexico industries created in the last year.”

Beyond the destruction of so many jobs, the ban would result in a $26 billion loss in household income, at the tune of $10,723 per household by 2025. Further, $86 billion in cumulative state gross domestic product would be lost, as well as $8 billion in state and local tax revenues.

“If a hydraulic fracturing ban were enacted,” the report concludes, “27,000 jobs would be lost, $7 billion in economic activity would be eliminated, household income would drop by $2 billion, and $681 million in state and local tax revenues would be lost in New Mexico—in the first year alone.”

Unfortunately, fracking has been maligned because of numerous false claims spouted by fracking opponents, including that the process pollutes the air and water. However, despite fear-mongering to the contrary, there is no evidence that seepage of fracking fluids, oil, or natural gas from fracking wells contaminate water sources. A plethora of scientific research, including more than two dozen peer reviewed studies and analyses released since 2010 and a six-year Environmental Protection Agency (EPA) study released in 2016, have determined the fracking process is not a systemic threat to groundwater sources.

Studies from across the country also reveal that air pollution near fracking operations typically poses no danger to human health. Moreover, EPA reports the decades-long decline in the nation’s air pollution has continued unabated since fracking became more widespread over the past decade.

Federal, state, and local governments have tested thousands of sites for hydraulic fracturing pollution of groundwater and drinking water resources over the past decade. In light of the immense number of studies showing fracking is safe and that it provides substantial economic benefits, New Mexico lawmakers should not seek to ban the practice, place a moratorium on it, or place onerous regulations on drilling activity. It is not meant to suggest there are zero risks associated with fracking or other drilling operations. However, those risks are quite small compared to the enormous benefits fracking continues to provide to New Mexico.

This Heartland Institute Policy Brief by Policy Analyst Timothy Benson and Linnea Lueken, a former Heartland communications intern, outlines the basic elements of the fracking process and then refutes the four most widespread fracking myths, providing lawmakers and the public with the research and data they need to make informed decisions about hydraulic fracturing.

The Economic Benefits of Hydraulic Fracturing to New Mexico – and the Consequences of a Potential Ban
https://www.globalenergyinstitute.org/sites/default/files/2019-12/the_economic_benefits_of_hydraulic_fracturing_to_new_mexico.pdf

This report from the Global Energy Institute at the U.S. Chamber of Commerce notes how historic levels of oil and natural gas production in New Mexico – made possible by advancements and improvements in hydraulic fracturing technology – have resulted in new job creation, economic growth, and increases in personal income that are leading the nation. It highlights both the benefits of the shale energy revolution and the real-world impacts that a ban would have on New Mexico.

This report from the Consumer Energy Alliance examined how the shale revolution across New Mexico has provided benefits to residents of the Land of Enchantment by boosting disposable income, revitalizing communities, and saving residential users $1.6 billion and commercial and industrial users $1.86 billion from 2006 to 2016.

This paper from the Texas Public Policy Foundation examines how the United States achieved robust economic growth while dramatically reducing emissions of air pollutants. The paper states that these achievements should be celebrated as a public policy success story, but instead the prevailing narrative among political and environmental leaders is one of environmental decline that can only be reversed with a more stringent regulatory approach. Instead, the paper urges for the data to be considered and applied to the narrative.

The Local Economic and Welfare Consequences of Hydraulic Fracturing
https://www.heartland.org/publications-resources/publications/the-local-economic-and-welfare-consequences-of-hydraulic-fracturing

In this fifth volume of the Climate Change Reconsidered series, 117 scientists, economists, and other experts assess the costs and benefits of the use of fossil fuels1 by reviewing scientific and economic literature on organic chemistry, climate science, public health, economic history, human security, and theoretical studies based on integrated assessment models (IAMs) and cost-benefit analysis (CBA).

This Heartland Policy Brief by Joseph Bast and Peter Ferrara documents the many benefits from the historic and still ongoing use of fossil fuels. Fossil fuels are lifting billions of people out of poverty, reducing all the negative effects of poverty on human health, and vastly improving human well-being and safety by powering labor-saving and life-protecting technologies, such as air conditioning, modern medicine, and cars and trucks. They are dramatically increasing the quantity of food humans produce and improving the reliability of the food supply, directly benefiting human health. Further, fossil fuel emissions are possibly contributing to a “Greening of the Earth,” benefiting all the plants and wildlife on the planet.

Impacts of the Natural Gas and Oil Industry on the U.S. Economy in 2015
https://www.heartland.org/publications-resources/publications/impacts-of-the-natural-gas-and-oil-industry-on-the-us-economy-in-2015

This report by the U.S. Chamber of Commerce’s Institute for 21st Century Energy examines the impact the development of shale oil and gas has had on the United States. The report’s authors found that without the fracking-related “energy renaissance,” 4.3 million jobs in the United States may not have ever been created and $548 billion in annual GDP would have been lost since 2009. The report also found electricity prices would be 31 percent higher and gasoline prices 43 percent higher.