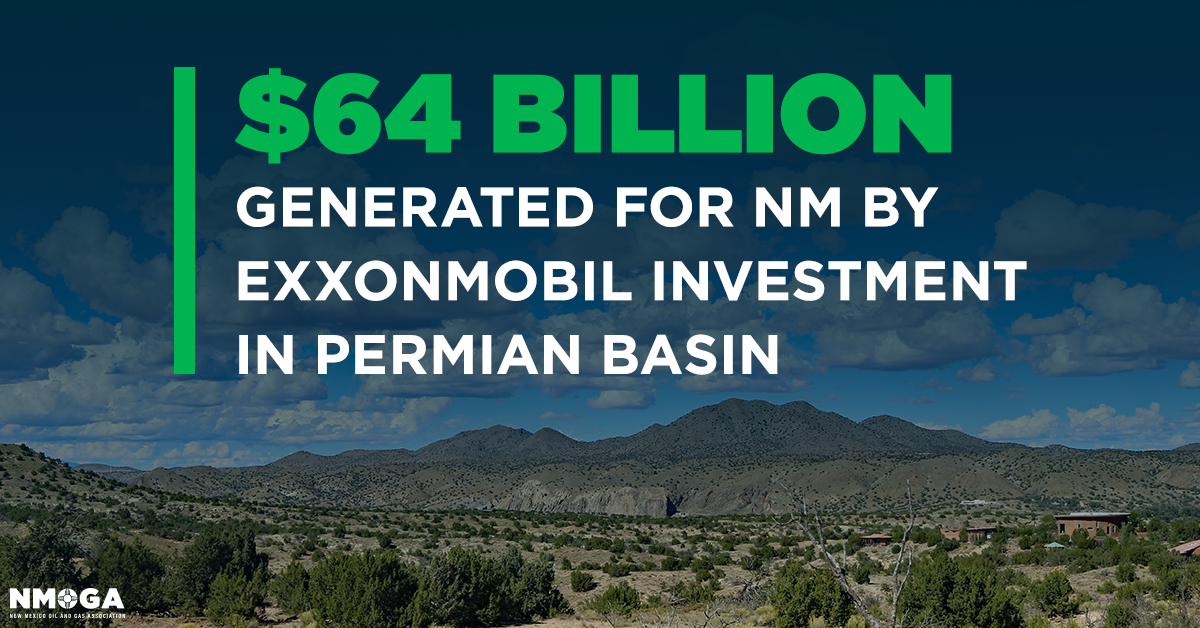 ExxonMobil's development of assets in the Permian Basin is estimated to provide $64 billion benefiting New Mexico over the next four decades, according to a report released by the company Friday.

The company said its investment in the Permian will represent $55 billion in capital expenditures in Eddy and Lea counties.

"The Permian Basin is the engine of America's energy renaissance and New Mexico residents will see direct economic benefits and opportunities from our planned investments," said Chairman and CEO of ExxonMobil Corporation Darren W. Woods, in a news release.

"We will be a significant, long-term economic contributor to the state of New Mexico and will work hard to be a trusted member of the community."

The figures are the result of a study conducted by Impact Data Source for the company, which assumes the price of a barrel at $40.

Approximately $44 billion of the estimated revenue for the state will be the result of new oil and gas developments.

The study estimated another $8.5  billion will be generated by state oil and gas severance taxes.

It also estimates that $1.8 billion in net tax revenue will be contributed to communities in southeast New Mexico where ExxonMobil operates.

"The benefit to this state's bottom line, as represented by investments from companies like ExxonMobil, has been enormous," Lujan Grisham said in a news release.

"My administration has been and will continue to be responsive to changes in the energy sector and the need for meaningful regulation and diversification as a means of ensuring a sustainable future - for our children, their education, the infrastructure that will support our collective future and more."

Estimates from the study indicate that over the next 40 years, approximately 4,100 jobs will be created by the company in New Mexico.

It said the jobs will result in a $29 billion investment in wages, salaries and benefits.

"In terms of employment, ExxonMobil's drilling and completion activity will support approximately 2,408 direct jobs per year and about 3,319 indirect and induced jobs per year - totaling more than 5,700 jobs per year in the state of New Mexico," an executive summary of the study read.

At its peak, the study read, the company is expected to support over 14,000 direct jobs.

In February, the Carlsbad City Council agreed to sell nearly 47 acres in the Carlsbad Airport Industrial Park for more than $2 million to XTO Energy for the construction of the company's new regional headquarters.

XTO was set to break ground on that facility by summer 2019. Company officials at the time said the headquarters could house up to 300 employees.

That development represents 19 years of growth in the study, which would result in about $7.1 billion in expenditures related to facilities construction.

In New Mexico, the Bureau of Land Management (BLM)reported an all-time high of oil production on federal land at 214.1 million barrels produced in fiscal year 2018.