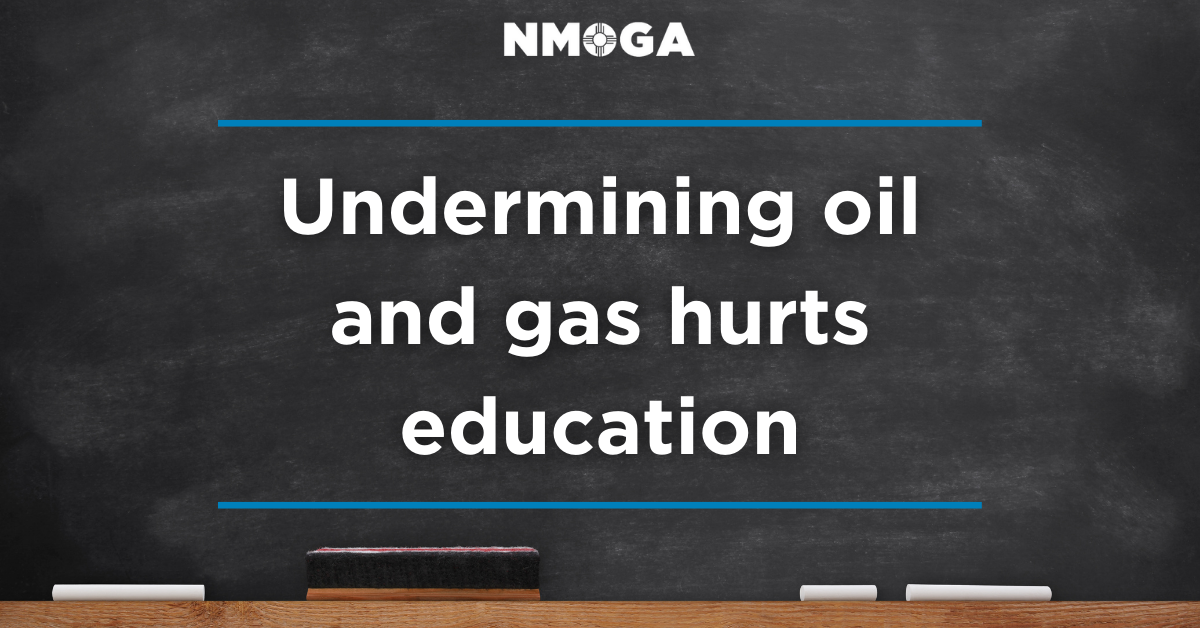 The Biden administration’s attacks on oil and natural gas are attacks on children’s educations.

In recent months, some public officials have wrongly attempted to demonize the oil and natural gas sector without a full appreciation of how it supports our daily lives. Some politicians in Washington claim new taxes on the industry and a federal leasing pause will allegedly help fix the industry. Unfortunately, few people understand what the consequences will be for everyday people like me in New Mexico who rely on our oil and natural gas if Congress and the Biden administration follow through on these damaging policies.

The fact of the matter is, oil and natural gas provide a way of life for people in New Mexico that they would not otherwise have. I have not only heard about this firsthand; I have lived it.

Growing up, my father worked in the oil and natural gas industry in West Texas. Starting as a pumper and working his own way up the food chain, he has been in the industry for over 30 years. This meant that my way of life as a child depended on the success of oil and natural gas.

During times when the industry was struggling, I remember my father saying things like “we have to watch our spending,” even though he worked his way up to supervisor. If this is the way of life for a supervisor, imagine just how much more difficult hard times are on the pumper.

Fast forward to now — the same holds true. I have been a teacher in Lea County for nine years. This is an area where many of the families are employed by and depend on the oil and natural gas industry. Even without the proposed taxes, I saw firsthand the effects that COVID-19 had on the industry, on the industry’s families and on my students.

When the demand for oil and gas dipped and people began losing their jobs, many of my students’ families had to pick up and leave as fast as they could in search of work elsewhere. This left us with many students unaccounted for overnight, having no idea if they would have the same living conditions where they were headed, or if they would even be enrolled in school.

This was already an area that struggled with high levels of poverty and homelessness. Around 80 percent of students in Lea County qualify for the free school lunch program. What many people don’t know is the money that our state makes from energy production on federally leased land goes toward public education.

Especially in the southeastern part of the state, the oil and natural gas industry is a major source of revenue. In 2020, oil and gas production on federal lands brought in $1.5 billion in revenue for the state of New Mexico; $734 million of that went to public schools and education. With the new federal leasing ban imposed, we will be severely limited on how much revenue we can generate, causing our schools to lose much of the funding they rely on.

A federal leasing ban would also cause families to tighten their budgets again, on top of the tightening brought on by the pandemic. Some people are quick to criticize the industry because of their biased conceptions surrounding oil and natural gas, but we cannot afford to lose millions of dollars’ worth of funding.

In reality, oil and natural gas producers in New Mexico have demonstrated great strides in combating climate change. Federal data has shown the transition from coal to natural gas for power generation has lowered U.S. carbon emissions for electricity by 33 percent since their peak in 2007. If the federal leasing ban and new taxes on the industry persist, we will be forced to increase our consumption of coal for electricity, which will ultimately be worse for the fight against climate change.

At the end of the day, my students would not be here without the oil and natural gas industry. It is vital to our economy, to our schools, and to the everyday lives of the children whose faces I see every day. We need to ensure that we help our oil and natural gas sector prosper and grow in a safe way that benefits everyone and bolsters their way of life.