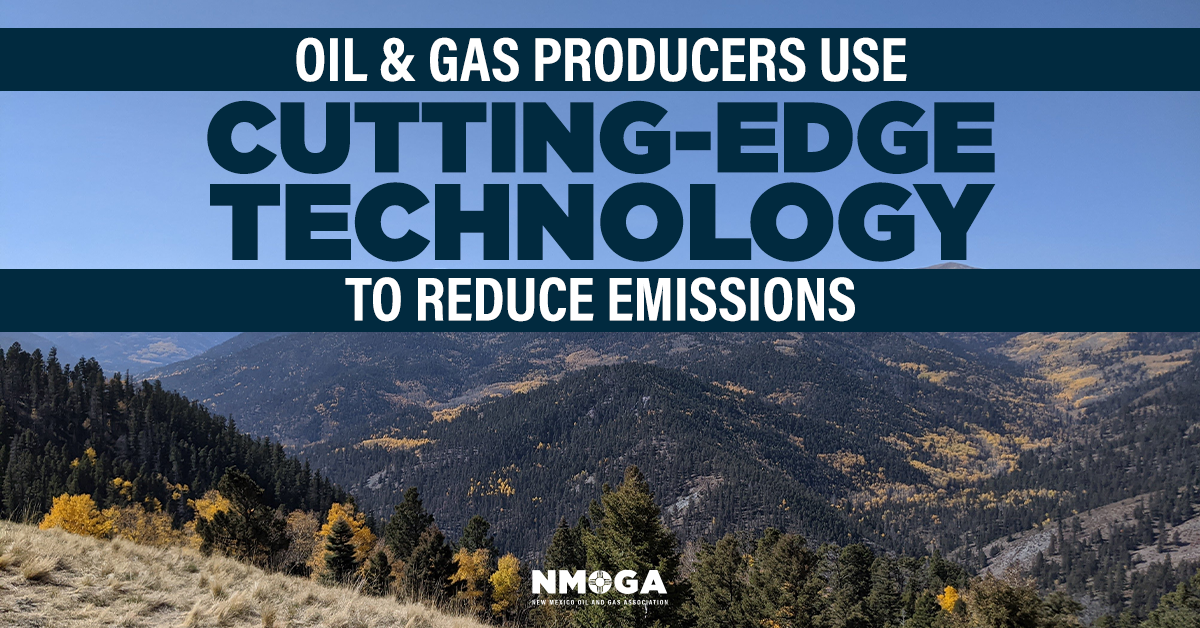 In the Permian Basin, which stretches across eastern New Mexico and West Texas, solar energy powers the production of natural gas and oil — just one of the ways energy companies are working to diversify America’s energy mix while reducing their environmental footprint.

At production sites across New Mexico, natural gas and oil companies are deploying cutting-edge technology and new processes to reduce water consumption and greenhouse gas emissions. The efforts have helped to drive down energy-related carbon dioxide emissions 8% between 1990 and 2017, even as energy production in the state surged 43%.

The state’s success shows it’s possible to fuel America’s modern way of life while also protecting the environment with the help of innovative technology.

New Mexico is an energy powerhouse, and is one of the top-producing states of both natural gas and oil. In 2018, the state ranked 8th in oil production and 3rd in natural gas production.

Energy companies in the state rely on technology to produce natural gas and oil as efficiently as possible. On production sites, employees regularly conduct leak detection and repair inspections. The inspections use cutting-edge infrared cameras that detect emissions invisible to the human eye. Drones, too, monitor production sites for accidental emissions. By combining regular assessments with swift repairs, natural gas and oil companies have been able to reduce greenhouse gas emissions.

The use of such tech has helped the industry reduce methane emissions in the Permian Basin by 64% while natural gas and oil production in the region is up 200%. The reductions in the area are roughly equivalent to the amount of emissions produced by all the households in Las Cruces, Rio Rancho and Roswell in a year. And it’s not just greenhouse gas emissions that are falling. Emissions of all air pollutants in New Mexico declined 58% from 1990 to 2019.

The benefit of emissions-reducing technology extends beyond New Mexico and across the country. More than 80 top energy companies formed The Environmental Partnership, a coalition focused on reducing methane emissions, a greenhouse gas emitted in the production and transportation of natural gas. In 2019 it surveyed 87,000 sites and inspected more than 116 million components, looking for leaks. In the Permian Basin, production grew nearly 170% from 2011 to 2018, while methane emissions relative to that production – assessing the effectiveness of measures taken to reduce emissions – fell nearly 45%, according to EPA data using a larger reporting system. Indeed, across some of the largest producing regions in the U.S., methane emissions rates were down nearly 70%

Water conservation is also a top priority for energy companies in New Mexico. A number of companies operating in the Permian Basin have recently invested in water recycling programs. With this infrastructure, producers are able to reuse the same water again and again, instead of relying on fresh groundwater. At some sites, roughly 90% of water used has been recycled. Companies are building towards using only recycled water in the future.

Looking to the Future

Efficiently producing natural gas will be even more important in the coming years, as New Mexico increases its reliance on cleaner natural gas and renewable power sources to generate electricity. In 1990, the state created roughly 90% of its electricity using coal. By 2018, New Mexico’s electricity mix was much more diversified: 41% powered by coal, 36% by natural gas and 19% by wind. As this transition occurred, carbon dioxide emissions from electricity generation dropped 35%.

Keeping natural gas in the mix will be crucial as the share of coal continues to drop and that of renewables rises. When the wind stops blowing or the sun goes down, power plants can quickly substitute natural gas as an energy source, ensuring reliable and consistent electricity. By pairing natural gas, which produces about half the carbon dioxide of coal, with renewables, power companies can guarantee a steady flow of low-emissions electricity.

Achieving this future, and building on our existing progress, will require additional investment in energy infrastructure and new technology. New pipelines and storage facilities will help energy companies continue to efficiently produce natural gas and oil, and support thousands of jobs.

Such investments will cement New Mexico’s standing as an energy leader capable of meeting the needs of the environment and growing energy demand.

To learn more about the companies, federal and state government agencies, colleges and universities, and nonprofits working together to find — and implement — solutions, visit energyforprogress.org.