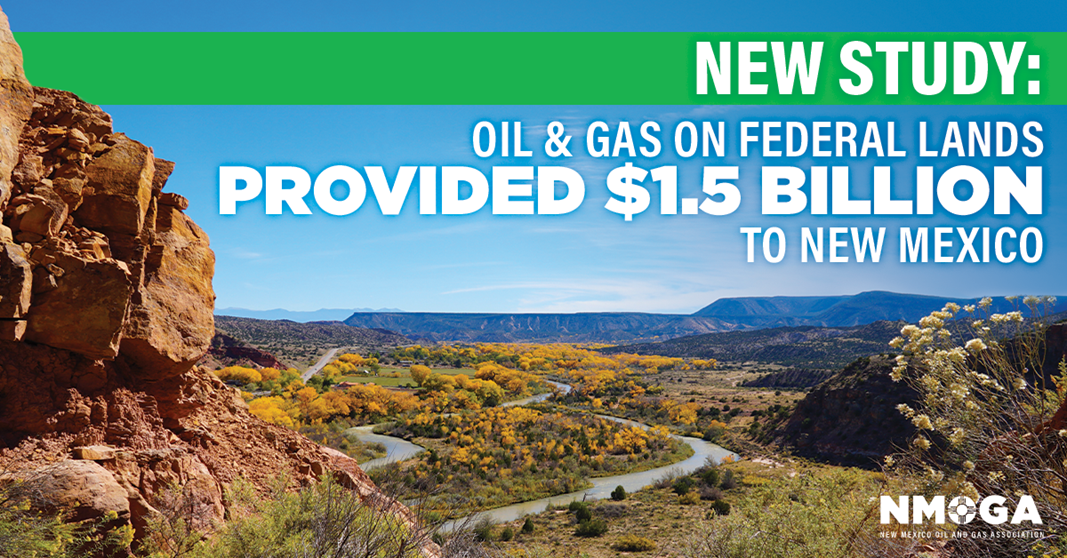 Accounted for 18% of State Spending in Fiscal Year 2020

SANTA FE, NEW MEXICO, February 2, 2021 – A new analysis of state revenue and spending reveals that oil and natural gas production and development on federal lands in New Mexico accounted for $1.5 billion in revenue and 18% of total state spending in fiscal year 2020. The New Mexico Tax Research Institute provided the analysis as an update to their December 2020 report outlining total oil and gas contributions as policymakers consider the impacts of the Biden administration’s recent federal leasing moratorium. The new analysis indicates federal lands are responsible for nearly 54% of the oil and gas industry’s $2.8 billion in state revenue.

“Oil and gas development on federal lands is and will be a critical part of New Mexico’s economic and fiscal future. Our ability to develop resources on federal lands has a direct impact on the future of our state and the level of investment we’re able to provide in critical areas like education, healthcare, and public safety,” said Ryan Flynn, President of the New Mexico Oil & Gas Association. “Policies like a federal leasing ban only threaten to upend our economy, and keeping energy jobs and development here at home, rather than outsourcing them abroad, has an enormous ripple effect on the entire state. New Mexicans want to work, and those who work in this industry want to continue the safe and responsible energy production that our state depends upon.”

The analysis states that of the $1.5 billion in revenue from federal development, $1.4 billion was allocated to the operating budget and $87 million to reserves. The primary revenue sources attributed to federal lands were $809 million of royalties and other payments from federal leases, $205 million of Oil and Gas School Tax, and $179 million of Gross Receipts Tax, among others. These revenues provided the state with $734 million in resources for public schools and education, $344 million for health and human services, and nearly $85 million for public safety, in addition to other spending.

“We share the new administration’s priority to reduce emissions and combat climate change, but we must do so with an inclusive approach that doesn’t put jobs, communities, and states like New Mexico on the chopping block. We are ready to work together to identify solutions and policies that ensure energy jobs stay in New Mexico and essential funding for teachers and first responders is not eliminated,” added Flynn.

A September 2020 analysis warned of negative consequences for New Mexico if a ban on federal leasing were to take effect. New Mexico, which accounts for 57 percent of federal onshore oil production and 31 percent of onshore natural gas production, is projected to be among the states hardest hit, losing over 62,000 jobs by 2022.

A detailed, county-by-county summary of statewide oil and gas revenue is available at www.nmoga.org/fuelingnewmexico.

The New Mexico Oil & Gas Association (NMOGA) is a coalition of more than 1,000 oil and natural gas companies and individuals operating in the state of New Mexico. NMOGA is the oldest and largest organization representing the oil and gas industry in New Mexico and its members include all facets of oil and gas production, transportation, and delivery. The oil and gas industry is the greatest economic contributor to the state of New Mexico, supporting more than 134,000 jobs and $16.6 billion in annual economic activity. Taxes and royalties from the industry account for 33.5% of the New Mexico’s annual state budget, including nearly $1.4 billion for education.